Swachh Salman Khan’s father upset with toilet opposite his flat

Waheeda Rehman who lives close by, too has also objected to the portable urinals. 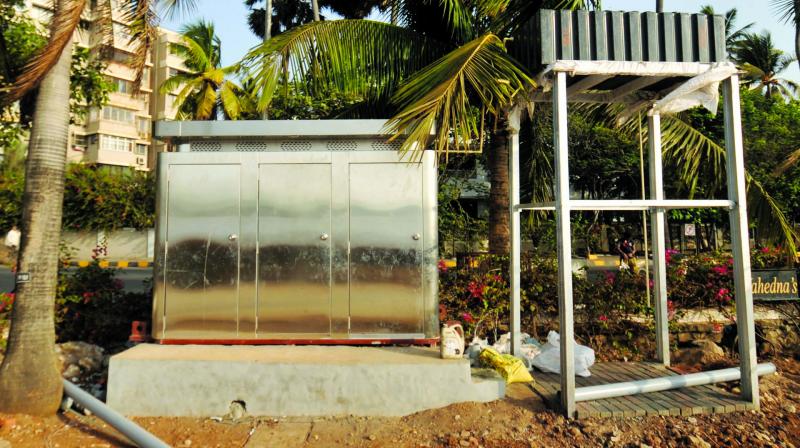 The portable urinal block is diagonally opposite Salman Khan’s house (in the background) at Bandra Bandstand.

Yesteryear actor Waheeda Rehman who lives close by, too has also objected to the portable urinals.

It may be mentioned here, the toilets are diagonally opposite Mr Khan’s house is mainly used by the hundreds of fans, who descend there to catch a glimpse of ‘Sallu Bhai’.

Salman, who is the brand ambassador of BMC’s open defecation free drive, is constructing toilets at Madras Pada, Aarey Colony at Goregaon.

“He (Salman) is constructing toilets where it is really necessary and for the benefit of people. Not to cause any inconvenience,” said the actor’s father.

Mr Khan and Ms Rehman’s contention is that the local residents were not taken into confidence by the BMC while installing the portable toilets opposite their houses at Bandra Bandstand.

“We are not against the toilet but the place the BMC has selected is not suitable. Will you feel good if someone constructs a toilet in front of your house? They should look at the convenience of local residents, who do not want a urinal there. We had suggested them five to six places for the construction of a toilet. They even short-listed one but in the end they constructed toilet at that spot only. We explained the situation to the mayor on Monday,” Mr Khan said.

Last month, few Bandstand residents, including Mr Khan and Ms Rehman wrote a letter to the BMC opposing the civic body’s plans to install a public toilet at the Bandstand promenade. The Mayor had written a letter to the H-West ward assistant municipal commissioner Sharad Ughade demanding relocation of the portable urinals.

Mr Mahadeshwar said the residents alleged that no proper procedure was followed while installing the urinals at the Bandstand promenade. “Before the construction of toilet, the civic body should have sought suggestions and objections from the local residents.” Mr Mahadeshwar said. Despite repeated attempts, Mr Ughade was unavailable for comments.

The Mayor said that he had already discussed the issue with the assistant commissioner. “He informed me that only a site visit was done. It’s not about doing any favour to VIPs but proper procedure should have been followed. I have asked the civic administration to check and inform me accordingly,” Mr Mahadeshwar added.