All six were rushed to the civic-run Rajawadi hospital. 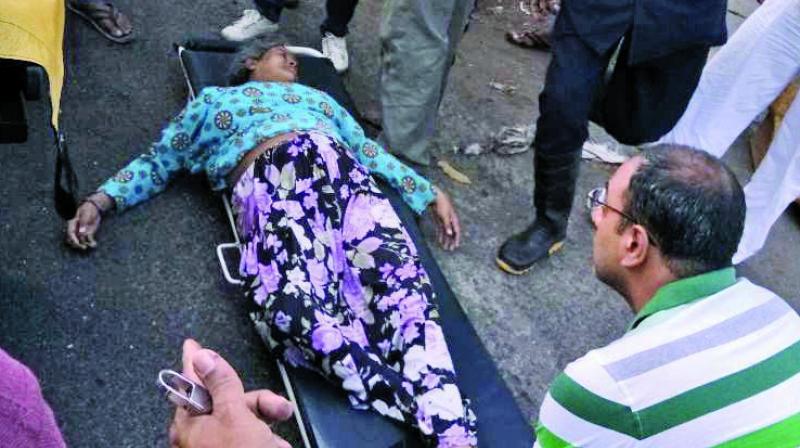 The woman who sustained serious injuries.

Mumbai: An ambulance on its way to Mumbai from Malegaon, toppled on the Eastern Express highway near Anand Nagar, Octroi Naka, Thane East at around 7pm Sunday, injuring six persons, including the patient and the driver.

All six were rushed to the civic-run Rajawadi hospital. While five of them suffered minor injuries, the sixth, a pregnant woman, sustained serious injuries. After the accident, the Thane Municipal Disaster Management took immediate action and helped the injured get admitted to the hospital in time.

According to Dr V. Thukur, superintendent of Rajawadi Hospital, “The injured have been identified as Akil Ahamad (33), who was driving and sustained injuries to his face, Mustak Ahamad (40), whose right leg was injured, Sankila Mustak Ahamad (35), who is one month pregnant and has been admitted to the Intensive Care Unit, Sukur Shaikh (50), fracture in right foot and right hand, Alida Abdul Rafik (65), who sustained a head injury and Mohammad Shabab (18), who suffered minor cuts to his face.”

She added, “The pregnant lady Sankila, her husband Mustak and Akil have been referred to the civic-run Sion hospital.”

According to Ali Ahmad, kin of the Ahmad family, they were travelling to Mumbai with their aunt Alida, who had been referred to a doctor in Mumbai for the treatment of her stomach ailment.