On March 12, 1993, the country’s commercial capital witnessed a series of 12bomb explosions, orchestrated allegedly at the behest of Dawood. 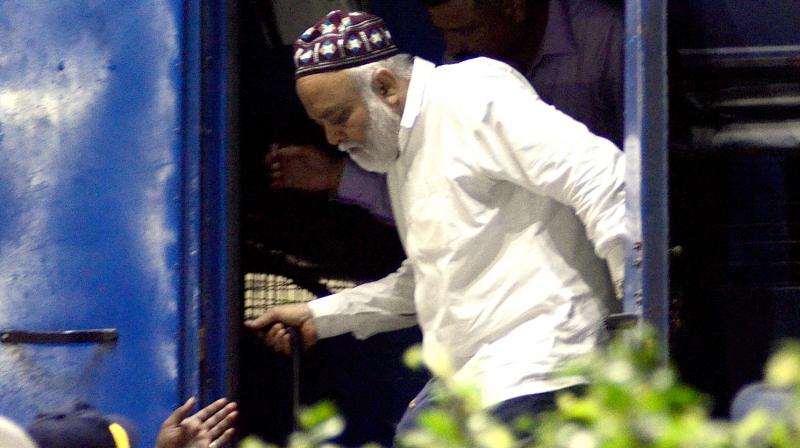 Takla was produced in TADA court in Mumbai.

Mumbai: India’s 25-year-long trail of Yasin Mansoor Mohamed Farooq, alias Farooq Takla, an alleged close aide of fugitive gangster Dawood Ibrahim and key accused in the 1993 Mumbai serial blasts, came to an end on Thursday when he was deported by the UAE authorities and arrested by the CBI in New Delhi following his arrival at the Indira Gandhi International Airport.

Takla was sent by a flight to Mumbai hours later and produced before a TADA court that remanded him to CBI custody till March 19.

Three months ago, the UAE government had contacted Indian government authorities and informed that it had detained Takla (56), who hails from Mumbai and held an Indian passport that was revoked after the issuance of an Interpol Red Corner notice against him in 1995. The UAE government asked India to send an extradition request for him, which was duly sent, said sources. According to the source, Farooq was eventually deported not extradited, as the latter course would have involved a time-taking judicial process.

In its request for bringing him back to stand trial in the case, India had narrated the alleged role he had played as part of the Mumbai serial blasts conspiracy.

While then stationed in Dubai, Takla, along with other accused like Tahir Taklya, played a role in allegedly arranging for hosting in Dubai, 25-odd blasts accused and then dispatching them to Pakistan for receiving training in sophisticated arms including AK-47s, grenades, rocket launchers and bomb-making using explosives like RDX, sources said.

Takla was allegedly close to Dawood, designated by the US authorities as a global terrorist and faces sanctions in the United Nations, and assisted him in handling the gang’s financial activities, said a source who is familiar with the probe. “Till the 1993 blasts, Takla used to use his Indian passport to visit Mumbai but stopped doing that after the attacks. His passport was revoked after the RCN was issued against him over charges related to criminal conspiracy, murder and terrorist activities,” said the source.

On March 12, 1993, the country’s commercial capital witnessed a series of 12 bomb explosions, orchestrated allegedly at the behest of Dawood and absconding co-mastermind Tiger Memon, which took place one after another in about a span of two hours. 257 human lives were lost, 713 persons were seriously injured and property worth about `27 crore was destroyed. This was the first ever terrorist attack in the world where RDX (Research Department Explosive) was used The youth were sent to Pakistan for training between February to March 1993, allegedly at the behest of Memon and Dawood.

According to the CBI, Tiger and Dawood orchestrated the blasts to avenge the demolition of the Babri Masjid at Ayodhya in December 1992 and the violence that took place in its aftermath.

According to a CBI source, one of the crucial meetings as part of the conspiracy took place on January 19, 1993, in Dubai, wherein Dawood, Taklya Mohammed Phanse Dawood and Memon were allegedly present and detailed discussions were held.

Memon allegedly agreed to arrange for the landing of arms and ammunitions and explosives, which were to be sent to India by the sea route.