Due to the collision between the two heavy vehicles, a fire erupted which was doused after the fire officials were rushed to the spot. 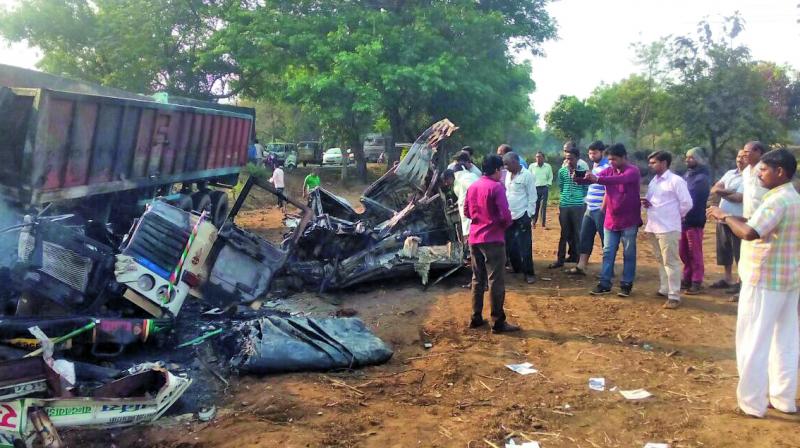 Due to the collision between a truck and tempo, a fire erupted, which was doused after fire officials.

Mumbai: Five persons died in a three-vehicle pile-up accident, resulting in a fire on the Mumbai-Goa highway at Mangaon town, Raigad district, early on Thursday.

A scooter, tempo and a truck rammed into each other at 6.30 am. The fire officials and police reached the spot and saved three persons, while five were charred in the fire. The police are yet find out who was at fault, and how the accident took place.

According to the police sources, the incident took place next to Gurukripa Hotel at Lonere Village of Mangaon Taluka near Mahad, located about 140 kilometres from Mumbai. Early on Thursday a truck (HR-74-A-2899) travelling from Mumbai to Goa and trailer (RJ-09-GB-8292) travelling from Goa to Mumbai crashed into each other and the two-wheeler (MH-06-BL-1972), that was behind the trailer subsequently rammed into them.

Due to the collision between the two heavy vehicles, a fire erupted which was doused after the fire officials were rushed to the spot.

The scooter rider was identified as Tushar Gawade (26) while the other four deceased are yet to be identified. The deceased included the drivers and cleaners of both the heavy vehicles. The fire officials managed to rescue three people, who were immediately rushed to a civic hospital for treatment. Their condition is said to be critical.

The traffic movement on the highway was affected for nearly two hours, which led to queuing on both sides. However, the vehicles were moved to the side of the highway with the help of a crane. Raigad’s Goregaon police registered a case under sections 279, 337, 338 and 304(a) of the Indian Penal Code and section 184 of Motor Vehicle Act.