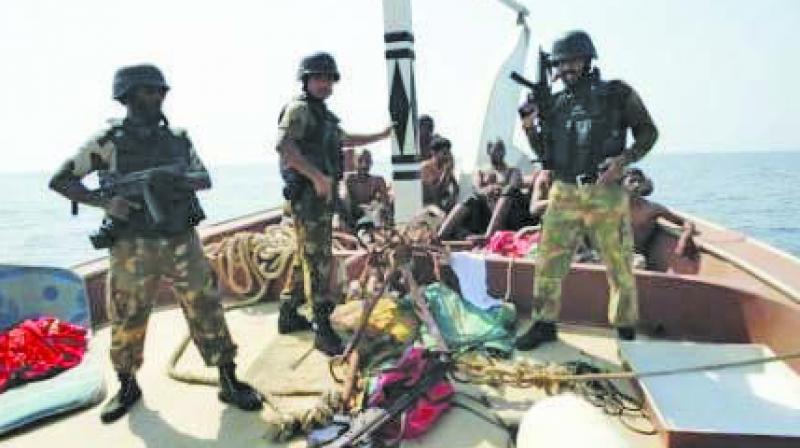 The move has been seen as a step in reducing the coastal wing’s dependency on the two central agencies.

Mumbai: In a first, officers and personnel of the Mumbai police’s coastal wing are being imparted deep sea weapons’ training, involving firing using floating targets, to enable them to thwart sea-borne armed attacks such as the 26/11 attacks orchestrated by Pakistan-based terror outfits. While police personnel have firing practice on land at the firing range, which takes place once a year, this if first time that they are undergoing training in the sea, sources said.

A decision on imparting specific training to the costal policemen was taken recently by the police top brass and the state government, and Coast Guards and the Navy was entrusted with the job of training them. This has been seen as a step in reducing the coastal wing’s dependency on the two central agencies and also to help the policemen hone skill sets as firing accuracy in rough waters and on land differs substantially.

Each of the personnel concerned is practicing with Kalashnikovs (AK-47s), self-loading rifles (SLRs) and Sten guns, which would help in improving capabilities to act against sea-borne crime and possible terror activities, police sources said.

The training schedule also includes usage of lifesaving devices during eventualities, rope knotting, effective handling of wireless communication devices, knowledge of boats and their engine, routes to be used during emergencies, knowledge of documents to be checked as per the Inland Vessel Act and effective patrolling including checking of barges and boats.

“The policemen are testing their firing capabilities using floating targets for the first time to gauge the difference of shooting a target on land and in the sea. Policemen of all three police stations are being trained in batches of five. The schedule also includes diving in the sea and conducting mock raids on suspicious vessels and apprehending suspects,” said sources from the security establishment, requesting anonymity.

The three coastal police stations have a sea jurisdiction up to 12 nautical miles from the shoreline. There are around 22 boats that are used by the Yellow Gate (south Mumbai), Sagari I (Mahim) and Sagari II (Gorai) police stations to patrol the area.

The drill will help the coastal police stations to  better their preparedness, conduct effective rescue operations and have increased confidence to operate in the sea among practicing firing from the weapons, sources said.