He is also considering Madha where the Nationalist Congress Party’s Vijay Sinh Mohite-Patil is the sitting MP. 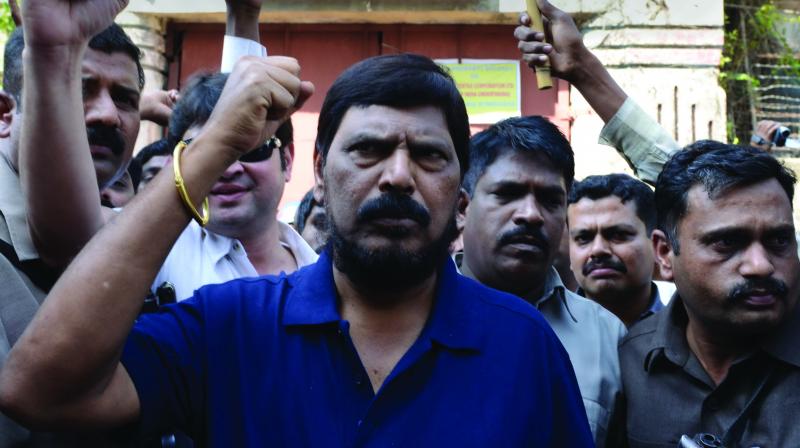 Mumbai: Union minister and Republican Party of India (RPI) leader Ramdas Athawale is planning to contest Lok Sabha elections with the Bharatiya Janata Party’s (BJP) support next year. He will be fielded from the Mumbai South Central constituency, where the Shiv Sena’s Rahul Shewale is the sitting MP. Mr Athawale told The Asian Age, “ If Mumbai is not possible, I will contest from Shirdi, Madha or Ramtek in Vidarbha.”

Mr Athawale said that the BJP should give an alliance proposal to the Shiv Sena in order to come to power after the 2019 elections. “I spoke with national general secretary Ramlal about an alliance with the Shiv Sena issue and will meet chief minister Devendra Fadnavis also. I will pursue the issue with Shiv Sena chief Uddhav Thackeray and will speak to Sena MP Sanjay Raut soon.”

Mr Athawale is a Rajya Sabha MP and his term will expire on April 2 2020. He was elected from Mumbai South Central in 1998-99. Mr Athawale, who is in search of a ‘safe’ constituency, said he is thinking of contesting from Shirdi and Ramtek where Sadashiv Lokhande and Krupal Tumane of Shiv Sena are sitting MPs.

He is also considering Madha where the Nationalist Congress Party’s Vijay Sinh Mohite-Patil is the sitting MP.

The seat from where Mr Athawale will contest will depend upon the issue of alliance between Shiv Sena and BJP, sources said.