According to the woman (Mehak Mirza Prabhu), the banner was lying around there and she picked it up and raised it. 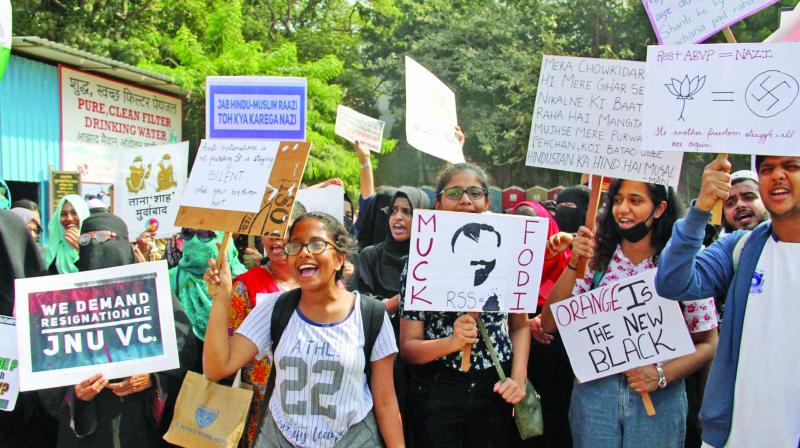 Mumbai: Maharashtra home minister Anil Deshmukh has said that the state government will review the case filed against the woman protester who was holding a banner with the words ‘Free Kashmir’.

“We all know that the internet and sms services have been shut down in Kashmir and people there are facing various restrictions. Several leaders there have also been detained. The woman has clarified that the Free Kashmir banner was regarding those restrictions,” said Mr Deshmukh while speaking to reporters after the proceedings of Vidhan Sabha were over on Wednesday.

According to the woman (Mehak Mirza Prabhu), the banner was lying around there and she picked it up and raised it. Hence, we are trying to know who prepared that banner and how it was brought there. I have also demanded a report on the FIR registered against the protestors who participated in the Gateway of India protests, he added.

A banner with the contentious words ‘Free Kashmir’ surfaced during the protests at the Gateway of India, where thousands had thronged on Sunday night to protest the attack on students and teachers of Jawaharlal Nehru University (JNU) in New Delhi.

The Colaba police had filed an FIR against Ms Prabhu, the woman protester at the Gateway of India whose placard reading ‘Free Kashmir’ created a furore across the country. The Colaba Police filed the FIR suo moto.

Ms Prabhu was booked under Section 153B of the Indian Penal Code for imputations and assertions prejudicial to national integration. No arrests have been made so far. If convicted, an accused booked under this charge could face imprisonment for a maximum of five years.

The banner had kicked up a political storm, with Bharatiya Janata Party (BJP) leaders objecting to the banner and calling it an ‘anti-India campaign.’ However, the Nationalist Congress Party and the Shiv Sena had defended her saying her message had been misinterpreted.