Wadala man administers dialysis on self for 14 years

Mr More, in spite of repeated attempts, had failed to retain his kidney functions, as both his organs stopped working. 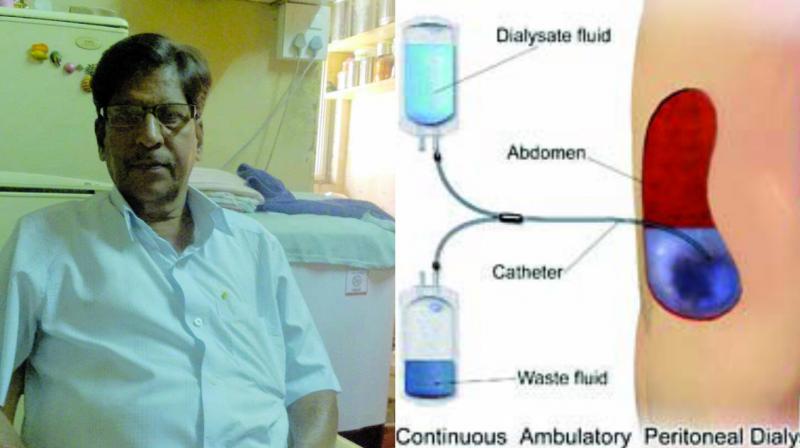 Prakash More does the dialysis procedure thrice in 24 hours.

Mumbai: It has been 14 years since Prakash More (59), a Wadala resident, has been carrying out his own dialysis at his residence without assistance from medicos, becoming a role model for those who cannot afford the cost of the treatment.

Afflicted with kidney failure for 20 years, Mr More, in spite of repeated attempts, had failed to retain his kidney functions, as both his organs stopped working. He opted for continuous ambulatory peritoneal dialysis (CAPD), which has shone a light for patients that suffer from kidney disorders and are financially weak, according to doctors at the civic-run KEM Hospital. When asked if an individual is permitted to do dialyses on his or her own, the head of the department of nephrology at the civic-run KEM Hospital, Dr Nivruti Hase, said, “Yes, it is a completely safe procedure, but one needs to be extra cautious since he or she can contract an infection, as a tube has to be inserted inside one's abdominal cavity.”

Dr Hase added that they have trained Mr More, since he preferred doing it by himself. “It completely depends on the patient's choice as to what type of dialysis he wishes to do.” Talking to The Asian Age, Mr More said that it is a difficult daily procedure that lasts for 15-20 minutes and has to be done thrice in 24 hours.

“I have to create an environment akin to an operation theatre. I clean the table more than six times each day and maintain sterilisation for the procedure. I had put the tube filled with the solution inside my belly, and the solution remains there for eight hours, after which the waste fluid is removed through the same tube and collected in a bag, which has to be disposed off,” Mr More said.

Dr Hase said that both the dialysis methods (see box) are effective, but these methods can be cost-effective and the patient saves time. Mr More has set an example for various kidney patients, Dr Hase said.