She was sitting on a bench near Diamond Garden, Chembur. 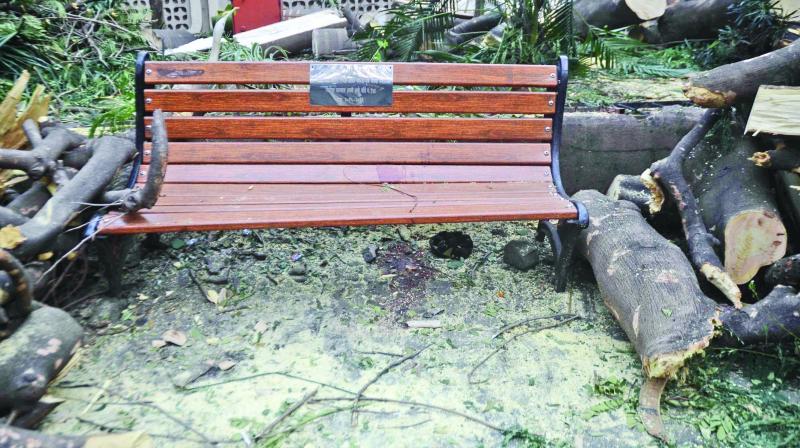 The bench on which Sharada Ghodeswar was sitting when a tree came crashing down on her near Diamond Garden, Chembur. (Photo: Shripad Naik)

Mumbai: A 45-year-old domestic help from Chembur died after a tree fell on her while she was sitting on a bench near Diamond garden, Chembur around 11 am. The deceased, Sharada Ghodeswar, was brought dead to the civic-run Shatabdi hospital at Govandi on Thursday afternoon.

The police is investigating the incident after it was found that the trunk of the tree was axed partially, hinting towards a likely sabotage.

Ghodeswar, was a resident of Gautam Nagar, Chembur. “She got severely injured and was rushed to the hospital by locals. We have filed an accidental death report,” said Shashikant Mane, senior inspector of Govandi police station.

The police said that Ghodeswar had taken a break after work for sometime when the mishap occurred. The Brihanmumbai Municipal Corporation’s (BMC) garden department stated that none of the trees in the area were reported weak in the last inspection.

At around 11am, a tree gave away and came crashing down on Ghodeswar. The police however stated that they found the trunk to have unusual marks, which hinted that the tree was sabotaged.

An inconsolable Sadananad More, a relative of Ghodeswar, asked if the government would raise her kids now.

The investigators said that they would seek expert opinion to find if there was intentional sabotage. The police is also going through CCTV footage of the neighbourhood to get some leads. The police has recorded statements of locals.

Senior medical officer Dr Padmashree Ahire said that Ghodeswar was brought dead to the hospital. "There were many injuries on her body. There were massive injuries in her brain which led to her death," Dr Ahire said.

Ms Snehlata Shrinivasan who had emplyed Ghodeswar as a domestic help said that she was a nice woman. "I was standing in the balcony when suddenly I heard a big sound. I saw the tree falling on her. I immediately informed the Govandi police, who came within minutes," she said. Yashwantrao Jadhav, a security guard who too witnessed the accident said that the woman (Ghodeswar) was lying in a pool of blood. "I immediately picked her up and rushed her to the hospital," he said.

Ghodeshwar is survived by her husband and three children. Her eldest son is studying in college and works part-time in a company while her daughters are studying in Class 3 and Class 8 respectively.