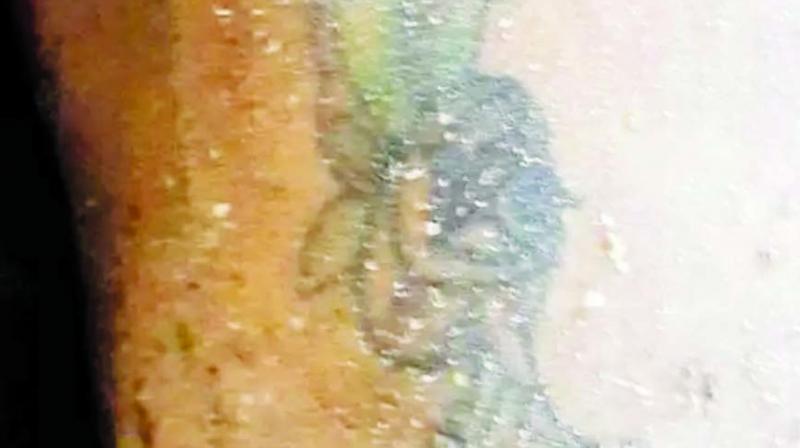 The fairy tattoo by which the body was identified.

Mumbai: The Santacruz police has arrested Prabhudas Surajnarayan Saha (38) for allegedly killing his wife Shakuntala Saha (34) on Tuesday night and dumping her body in the waters.

Shakuntala’s body washed ashore on Santacruz chowpatty on Wednesday morning, with scratches and marks on her body.

The deceased was identified by a tattoo on her left arm that depicted a fairy-like figure, most probably that of Tinker Bell, a character from Peter Pan.

Sources revealed that the murder was a result of a violent fight between the couple over a phone call. Saha had suspected his wife of having an illicit relationship and thought she might have been talking to her male friend.

Police sources said Shakuntala’s body was discovered by some beachgoers near Juhu Koliwada on Wednesday morning. Looking at the marks on her body, the police
understood that she was killed and registered a case of murder of an unknown woman against an unknown person. On further investigation, it was revealed that Shakuntala was a native of Jabalpur and was staying with Saha in Versova. When the police brought in Saha for questioning, he started giving vague answers and finally cracked up.

Shantanu Pawar, senior police inspector of Santacruz police station, said, “Saha revealed that he had been suspecting his wife of having an affair, and used to have constant tiffs about it.

On Tuesday night, the argument escalated and he hit her after which he ended up strangling her. Saha then packed her up in a gunny bag and threw her in the Koliwada waters.”

The accused has been arrested under sections 302 and 201 of the Indian Penal Code, which pertains to murder and causing disappearance of evidence respectively.