Mumbai monorail services will not start this year

The fire had gutted two coaches of the monorail and damaged the rooftop of the station. 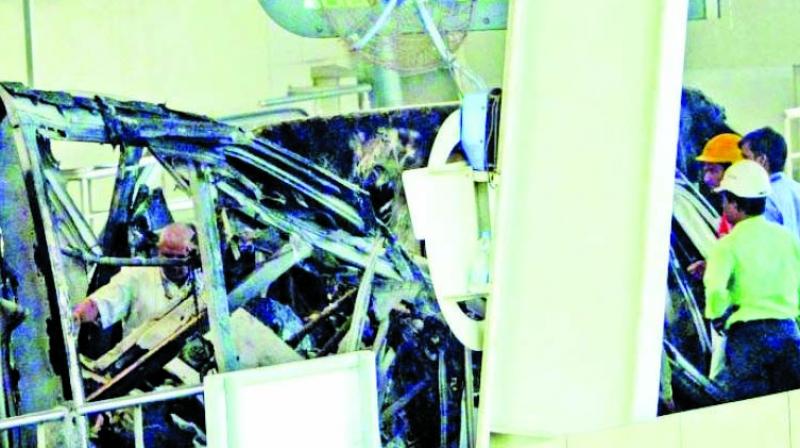 File picture of the damage done due to the fire.

Mumbai: Mumbai monorail services (Chembur-Wadala depot) route which faced a fire accident earlier in November, may not start this year since the authorities are in the process to repair the damage and replace the systems.

The fire had gutted two coaches of  the monorail and damaged the rooftop of the station. The enquiry committee has suggested to install smoke detectors in all the rakes. The entire staff of monorail will be getting a refreshed training to deal with such incidents in future.

“The incident was a wake up call for the authorities and now we are initiating various activities for our staff. Fire training will be given to them again. A refresher training course will also be given to the staff. The training is going on currently. Several systems were damaged and replacing each of them may take beyond two-three weeks,” said a senior MMRDA official.

A major fire gutted the monorail coach on November 9, and although no casualties were reported, the services were suspended since then. An inquiry report was sought which revealed that sparks from the system came in contact with the tyres which led to the fire.

“The report suggests that smoke detectors are to be installed in every coach. However, we are still thinking if we should implement it or not because smoke can be detected from anywhere from the street,” said the official.

The rake which caught fire was running continuously since the previous night for Monorail phase 2 (Wadala to Jacob circle) testings. “As of now, fitness tests of three rakes have been completed and two are remaining to be tested. Also, worn out tyres of the rakes are in the process of getting replaced,” added the official.

Meanwhile, the authority has marked several CCTV cameras which are defunct at few spots and have geared to replace them all.