The BJP in its manifesto had promised building the Dr Ambedkar memorial at Indu Mill, Dadar, in 2014. 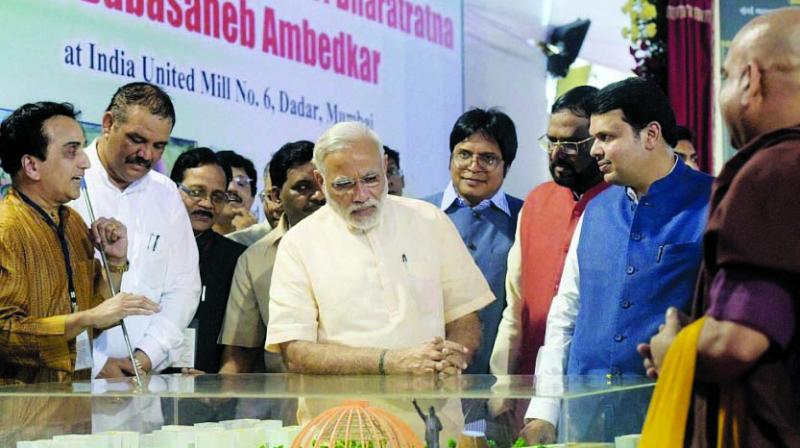 The PM laid the project’s foundation stone in 2015.

Mumbai: Prime Minister Narendra Modi’s inauguration of the Dr Babasaheb Ambedkar memorial in Delhi has led to political parties and activists raking up the Indu Mill issue. While the PM carried out bhoomi pujan for the project two years ago, nothing much has moved on the ground since. The BJP in its manifesto had promised building the Dr Ambedkar memorial at Indu Mill, Dadar, in 2014. A year into being elected, PM Modi had laid the foundation stone of the memorial in October 2015. With this, followers of Dr Ambedkar were assured that a huge memorial with his statue would be erected near Chaityabhoomi, the place where he was cremated.

However, two years have passed and nothing has changed as far as Indu Mill is concerned. With one-and-a-half years having gone into the bureaucratic work of transferring land from National Textile Corporation (NTC) to the Maharashtra government, activists and political leaders have started raising questions over the delay.

“PM Modi laid the foundation stone but nothing happened since then. No tender was awarded for the project. It is BJP’s way of functioning and using dalits only for political purposes,” slammed Mumbai Congress chief Sanjay Nirupam.

Activists are also raising the same questions. Sumedh Jadhav, veteran dalit activist questioned, “BJP should clarify why there is a delay in starting the project? And if it is due to bureaucratic reasons, then why did the party misled people by laying the foundation stone at the hands of the PM two years ago?”

Meanwhile, social justice minister Rajkumar Badole said that work on the project was on the right path. “Our government bought Dr Ambedkar’s home in London. We built a huge memorial for Dr Ambedkar in Delhi in record time. Similarly, the Indu Mill memorial too will come up as it is our commitment to the nation,” he said.