The upper portion of the tree came crashing down on Ms Nath who collapsed under its weight. 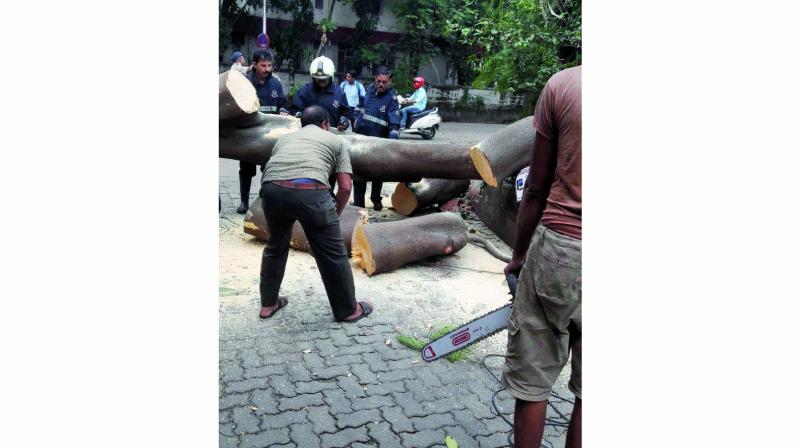 Former TV anchor Kanchan Nath lost her life after a coconut tree fell on her at Chembur.

Mumbai: Sharada Ghodeswar’s death Thursday morning is the fourth casualty due to tree collapses this year. In July, former TV anchor Kanchan Nath lost her life after a coconut tree fell on her at Chembur.

Ms Nath (58), a former TV anchor and yoga instructor, was returning home from work on July 20 when a coconut tree fell on her as she walked down Sant Venkaiah Marg, Chembur. The upper portion of the tree came crashing down on Ms Nath who collapsed under its weight. Extricated by passers-by, she was shifted to the nearby Sushrut Hospital where she died. Incidentally, the owner of the bungalow, where the coconut tree stood, had approached the BMC to cut the 50-year-old tree at the required cost.

However, in an inquiry report, the BMC said that there had been no negligence on the part of garden department officials and gave them a clean chit. The mishap occurred due to high wind speed due to which the tree collapsed, the report said.

The report added that after receiving the complaint, officials from the garden department visited the site and noted that the tree had a four-metre circumference and was about 40 metres tall, and its growth was natural. They further noted that the tree wasn’t diseased or ridden with pests, which is why they deemed it safe. Hence, they only gave permission to trim some of its branches.

Rajat Nath, Ms Nath’s husband told The Asian Age, “The deaths due to tree falling incidents are happening due to civic officials’ negligence. We have videos to prove that there were no strong winds when the tree fell on my wife. We have approached the court to seek justice for my wife in this.”

Mr Nath wondered as to how BMC officials could give themselves a clean chit. Such incidents, where criminal negligence was involved, should be investigated by an independent authority, he said.