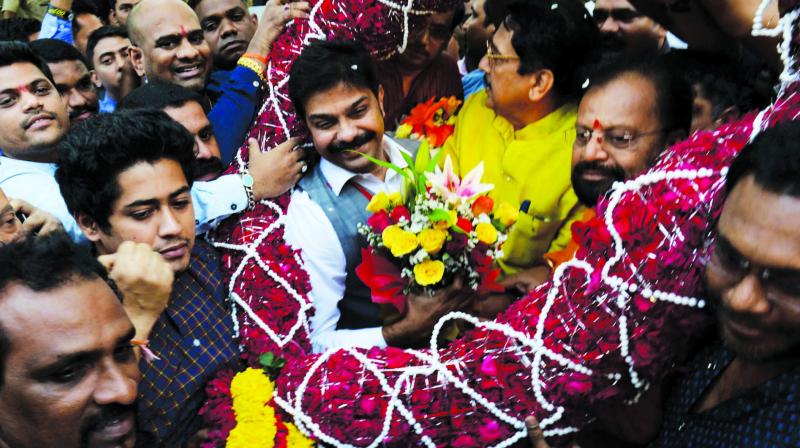 Mumbai: BJP candidate Prasad Lad won the council election on Thursday with 209 votes against Congress-NCP candidate Dilip Mane who got only 73 votes. A total of 14 cross-votes were witnessed of which 9 were from Congress and NCP. Congress MLA Nitesh Rane and NCP MLA Ramesh Kadam, who is an under-trial, openly cast their votes for the BJP although voting for the council poll was through a secret ballot.

The cross-voting has come as a big blow to the Congress and NCP, though the opposition was not going to win the poll. Also, NCP MLA Kadam, who is also undertrial and Chhagan Bhujbal, two MIM MLAs did not come for the vote. Shiv Sena's minister Arjun Khotkar also did not come as his election process was quashed by the court. Two votes were declared invalid.

Mr Lad attributed his victory to BJP and Sena alliance. "I got 209 votes. I attribute my success to the party and the alliance partners," Mr Lad said. Earlier in the day, Mr Rane said that his father Narayan Rane has supported the NDA, hence he had voted for the BJP candidate. Leader of opposition in the assembly, Radhakrishna Vikhe Patil said that the party would take strict action against Mr Rane for going against the party.