He had removed manhole cover, which proved fatal. 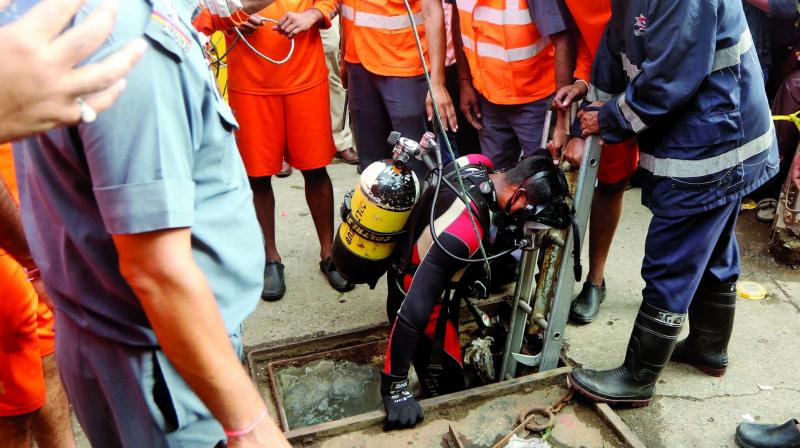 Mumbai: The Mumbai police has arrested the sixth man wanted for his role in allegedly opening a civic manhole in Elphinstone Road during the heavy downpour on August 29, which led to the death of gastroenterologist Dr Deepak Amarapurkar. The arrest of the accused, Ramesh Kasbe (30), a local banjo player who had fled to Satara on learning he was under the police scanner, will enable the police to submit its case chargesheet by this week, said police sources.

Kasbe was part of a group of six locals who posed as civic workers to open the manhole as their street-side residences were getting submerged. The Dadar police’s probe into the death of Dr Amarapurkar had revealed that the six men, who opened the manhole, had posed as BMC workers when the police constable, Naineshwar G, halted them, questioning their act, as first reported by The Asian Age on September 21. The accused had however lied to hide their illegal act. The police is likely to conduct a test identification parade soon in which the constable will participate to confirm Kasbe’s
identity.

The doctor’s body was recovered around 36 hours after he fell by Coast Guard divers from Worli seashore where drain waters get discharged. Five of the six accused were arrested earlier and were booked by the police under Section 304 of the Indian Penal Code for alleged culpable homicide not amounting to murder, which is punishable by imprisonment up to life.

“Kasbe has been arrested, brought to Mumbai and remanded in judicial custody. He was part of the group comprising six local men who had opened the manhole, after which Dr Deepak Amarapurkar fell in it and lost his life,” said senior police officer. He said, “We were waiting for his arrest and will now submit the chargesheet in the case by this week most likely.”

The probe also revealed that a local, Anant Patil, had tried his best to save the doctor by clutching his hands in his final moments but the water pressure sucked him inside the manhole. In the end, Mr Patil was left clutching the doctor’s umbrella, which had distinctive marks that eventually helped in identifying the body.

The Indian Medical Association Mumbai chapter criticised had criticised the civic body and wrote to the BMC commissioner seeking inquiry into the death of the doctor.

What happened on Aug. 29

The accused persons told the police that some time after 4 pm on August 29, when the city received over 300mm of heavy showers, which crippled public transport, they had decided to open the manhole located at a point around Senapati Bapat Marg and SN Matkar road, as their street-side chawl residences were overflooded. The manhole’s metallic cover was “very heavy” and required the efforts of at least six persons.