The Central Railway put out a plea on Twitter asking commuters not to take matters into their own hands but in vain. 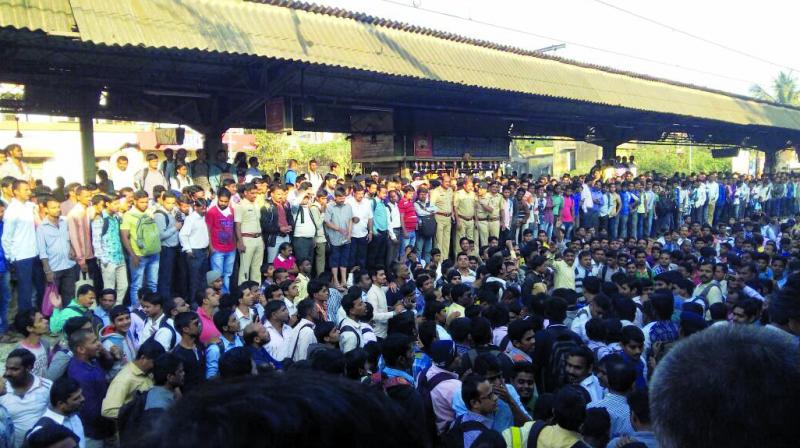 Irate passengers block the railway tracks at Titwala station after which train services on the Titwala-Kandiwali route came to a halt on Wednesday morning. (Photo: Asian Age)

Mumbai: Titwala station on Wednesday saw a rail-roko for over two-and-a-half hours after serious delay in train services owing to an impromptu block taken between Aatgaon and Khadavli which took way longer than expected. This in turn caused 40 trains to be fully cancelled, nine partially cancelled, and 70 delayed. The Central Railway (CR) put out a plea on Twitter asking commuters not to take matters into their own hands but in vain. Late in the morning, CR’s twitter handle read, “CR appeals to passengers at Titwala to board trains so that services can resume on the Kasara-Kalyan section.”

Apparently, the Aatgaon-Khadavli block was taken to fix the overhead wire in that section and was even completed on time i.e. 4:40 am. However, circuit breakers which conduct electricity on the overhead wire had a technical glitch which could not be rectified before 5.55 am. An official on condition of anonymity said, “The 5:33 am train arrived at Titwala at 5:55 am but before that, two mail express trains, namely Devnagri and Vidarbha, went by without stopping, so people felt that they could have at least boarded these trains to travel to their workplaces.”

Other CR officials, however, said that matters came to such a head that deputy Sudharshan Gupta was forced to sit on the tracks at Titwala and hence, could not give signal to both these mail express trains to halt. This state of affairs continued from 6.10 am to 8.55 am. Irate commuters finally asked Mr Gupta to give them written assurance that such delays would not occur again. Mr Gupta relented and the letter (a copy of which is with this newspaper) reads, “To the honourable public of Titwala, I request all of you respected commuters to end the rail roko immediately. I assure that henceforth, all suburban trains will maintain punctuality. In case of any failure, mail express trains towards the disturbed section will be halted at Titwala.”

When contacted, CR divisional railway manager, Ravindra Goyal, made a similar appeal.“I would like to request commuters to understand that there may be such failures but please avoid a situation like rail-roko where other commuters too suffer.” There have been similar rail rokos held by commuters: one on August 12 this year and before that in January 2015.