The animal that was declared 'fit to release' by the veterinarian SGNP on November 15 was a guest to the park in one of its cages. 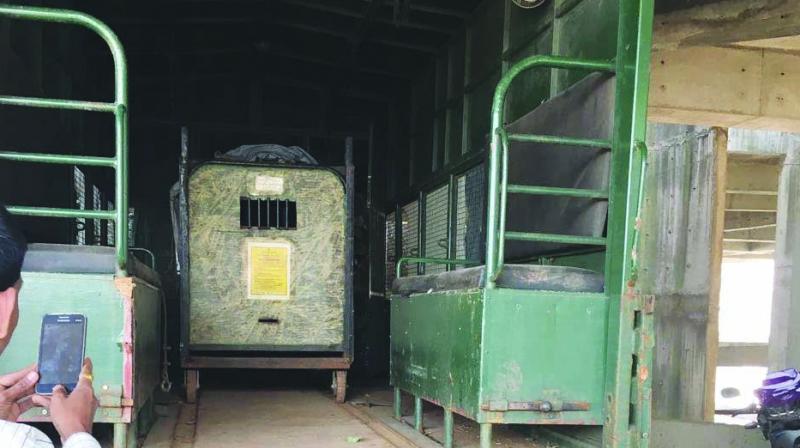 File picture of the leopard in a trap while being taken to SGNP from Powai on Saturday.

Mumbai: After spending 22 days in a cage at Sanjay Gandhi National Park (SGNP), the full-grown leopard which had been trapped early in the morning on November 12 near IT Supreme Park, Powai, was released on December 5 by the Thane forest department.

The animal that was declared 'fit to release' by the veterinarian Sanjay Gandhi National Park (SGNP) on November 15 was a guest to the park in one of its cages. Asked about the big cat’s release, Shree Bhagwan said, “The order to release the leopard was sought and permitted as well”. Hinting that the animal may have been released in Chandoli in Sangli district, Mr Bhagwan explained, “In case the animal cannot be released back into the area from which it was trapped, the place best suited can be chosen for it to be released.”

The leopard was trapped in the small hours of November 12 near IT Supreme Park, which, according to forest officials, has nearly 700 people working on its premises. The officials said that though there was no man-animal conflict per se, the big cat was trapped because the frequency of its sightings had increased. On November 15, the animal underwent a medical check-up at SGNP as per standard operating procedure (SOP) and was kept there since. SGNP veterinarian Dr Shailesh Pethe declared it “fit for release” before December 5.

Range forest officer Santosh Kank, who was part of the five-member team which released the animal, said, “The leopard was safely released back into its natural habitat on December 5. However, location of the release of the animal cannot be disclosed.”

Meanwhile, Krishna Tiwari, wildlife researcher and conservationist, said, “The animal should be released within 30 km from the place where he was trapped. If released in a place farther from his territory, chances of man-animal conflict in that area will increase.”