The work of cutting 2,141 trees at Aarey Colony began on Friday night. 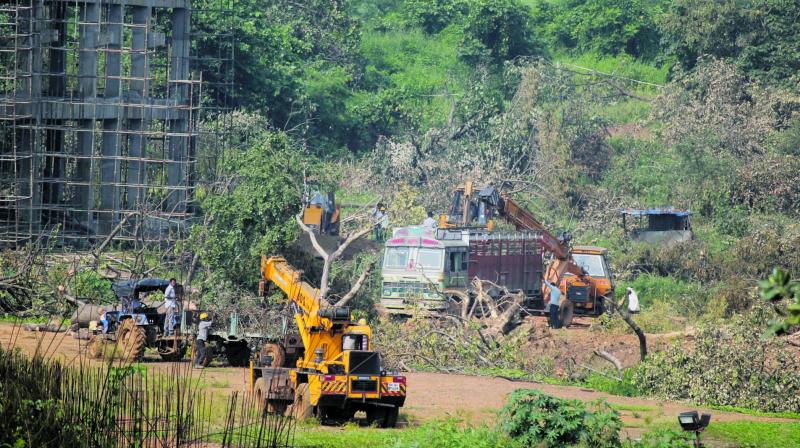 Mumbai: The Mumbai Metro Rail Corporation Limited (MMRCL), the nodal agency for the proposed Colaba- Bandra-Seepz metro line, said that it would abide by the Supreme Court’s order restraining it from cutting more trees in order to build a car shed for the corridor, but also stated that it would commence constructing the proposed structure.

Highlighting that the construction and other related work would continue at the site, an MMRCL spokesperson said, “Following the decision of the high court on upholding the permission of the tree authority, the felling of 2,185 trees was undertaken on October 4 and 5, 2019 and 2,141 trees have been chopped. These will be cleared from the site and subsequent construction activities will be carried out.”

The MMRCL also said that construction of the building would continue as planned, confirming the state government’s earlier interpretation of the SC order that only said “status quo (is) to be maintained... with respect to cutting of trees”.

In its statement, the agency claimed to have planted 23,846 trees and distributed 25,000 saplings as part of its “green initiatives”.

The work of cutting 2,141 trees at Aarey Colony began on Friday night and it was stopped on Monday noon following the SC order, which means, on an average, around 30 trees were cut in an hour. Some locals present at the site alleged that the tree cutting work was going on till evening at the site.

The state counsel stated that the requisite amount of trees that had to be cut for the metro car shed had already been done before the Supreme Court’s stay order.

However, Rishav Ranjan, a fourth-year law student from Delhi who moved the plea in the apex court said that the MMRCL should not start any work, given the stay order on tree-felling till October 21.

“The MMRCL said that it would remove logs and start constructing the car shed. However, if the stumps and roots are still intact at the site, the MMRCL should refrain from carrying out such activities. What is the point of the stay order and the next hearing if the body continues to work at the site,” said Mr Ranjan.