At least nine mainland-fishing boats along with 104 crew arrived at various islands of Laksha-dweep. 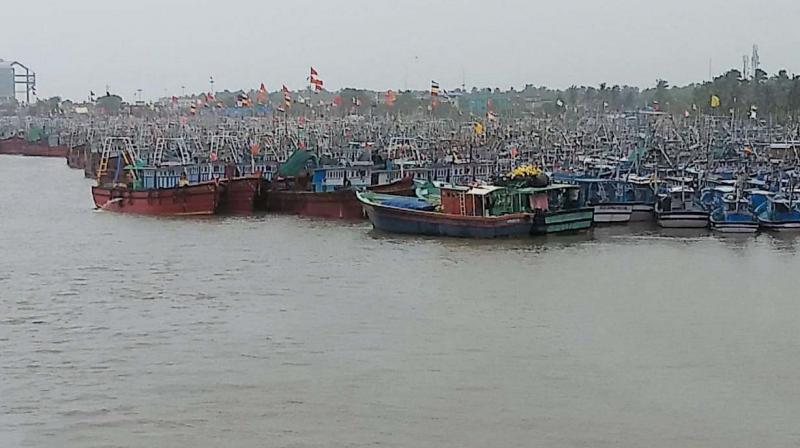 At least 76 fishing boats have been escorted to islands for anchoring.

Mumbai: The Coast Guard has issued an alert over an imp-ending cyclonic storm th-at could hit the western shore and is guiding fishing boats and trawlers to nearest islands off the west cost. The Coast Guard said that at least 76 fishing boats had been escorted to islands for anchoring and that the warning was still being relayed continuously via the VHF band. Coast Guard headquarters in Mumbai is coordinating the operation.

On Sunday, the Coast Guard launched three of it aircraft to check on the fishing activity in the backdrop of the impending cyclone and found that the patch between Kanapura and Karwar had dense fishing, whereas there was scanty fishing on north Kerala coast and no fishing off south Kerala coast. “The aircraft continued to advise fishing boats to proceed to safety. With the continuous advisories issued, at least 76 fishing boats off the Kerala and Karnataka coast were guided to safety. The cyclone warning has been communicated to all fishermen’s unions and department officials,” said a Coast Guard officer.

In all, 1,200 fishing boats were anchored off Malpe due to bad weather, 17 other state-fishing boats (Tamil Nadu and Kerala) had also taken shelter at Malpe. In one of the Coast Guards’ most important precautionary measures, weather warnings are being continuously broadcasted on VHF through ROS Kavaratti in local languages and all fishing boats are being advised to take shelter in the nearest islands.

At least nine mainland-fishing boats along with 104 crew arrived at various islands of Laksha-dweep. Earlier, a Dornier aircraft that flew from Ko-chi directed 25 fishing boats operating about 50 miles away along the Kerala coast to safety.

An ISN (international safety net) Message has been active since October 3 requesting merchant vessels in the area to warn fishing boats and advice them to return to harbour.

The fishing boats and trawlers are being escorted by Coast Guard ships Samrat, Samar, Samarth, Rajdoot, Abhinav along Kerala, Karnataka and Goa coast and off the Lakshadweep islands. Approximately 35 boats have been directed to safety.

The Coast Guard is also in contact with the centres at Muscat, Oman, Sanaa (Yemen) and they have been requested to assist Indian fishing boats and dhows in their search and rescue regions.