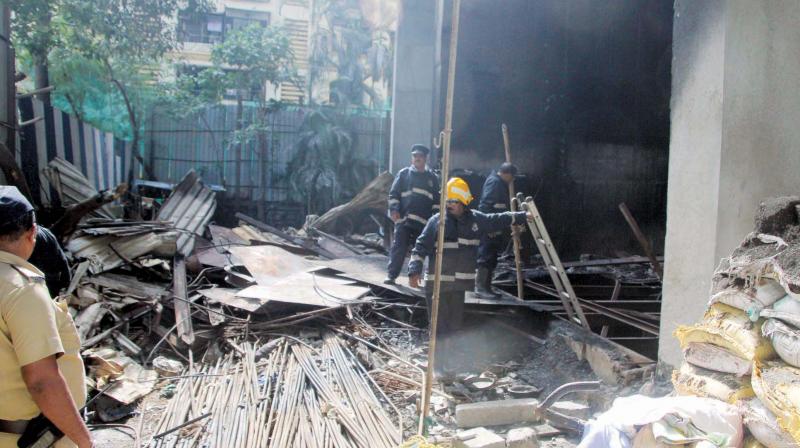 Fire brigade officers at the site of the incident. (Photo: Mrugesh Bandiwadekar)

Mumbai: The Brihanmumbai Municipal Corporation’s (BMC) fire department has lodged a first information report (FIR) with the Juhu police station against the developer and contractor of Juhu-based ‘Prarthana’ building where a fire erupted, claiming six lives on Wednesday night.

While the cause of the fire is still being investigated, according to prima facie evidence, a liquified petroleum gas (LPG) cylinder explosion is allegedly the main reason for the conflagration. “An FIR has been registered against the developer. He cannot allow an LPG gas connection to be provided to temporary accommodations,” said P.S. Rahangdale, chief fire officer.

Sunil Ghosalkar, senior police inspector of Juhu police station, told The Asian Age, “We have registered an FIR against the builder(s), who is still unidentified, and are looking for the documents for the same. The accused has been booked under sections 304(A), 337, 338, 285 and 34 of the Indian Penal Code, which pertain to causing death due to negligence, causing hurt and grievous hurt, negligent conduct and common intention respectively.  The investigation is still underway and not much details can be divulged at this point of time.”

Asked about the unauthorised nature of gas cylinders, Mr Ghosalkar told The Asian Age  “We are looking into the matter and the necessary action will be taken.”