Kaskar was arrested but granted bail in an extortion case in February 2015. 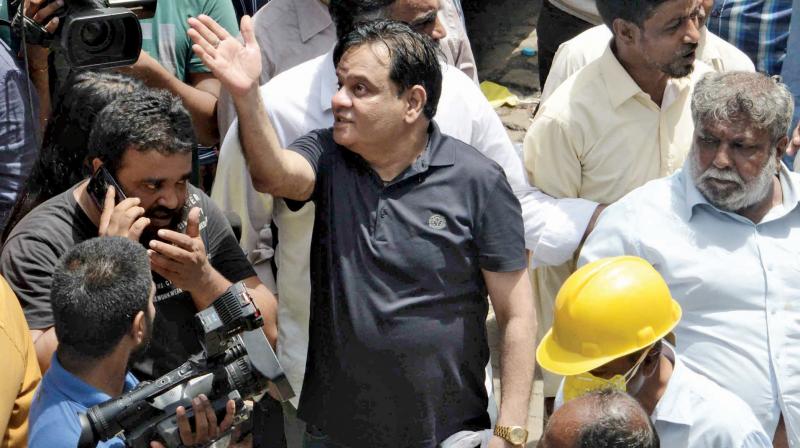 Iqbal Kaskar at the time of the ill-fated Hussaini building’s collapse.

Mumbai: In the wake of the Hussaini building collapsed at Bhendi Bazar’s Pakmodia street, killing 33 people, Iqbal Kaskar, brother of wanted gangster Dawood Ibrahim, who stays in the adjoining Damarwala building has been asked to vacate the dilapidated structure. Kaskar has been staying there for a long time. Along with Damarwala building, he has been also asked to vacate Shabnam Guest House located at J.J. Marg area since that too is a dilapidated property.

A four-page notice issued under the Smugglers and Foreign Exchange Manipulators (Forfeiture of Property) Act, 1976 (SAFEMA Act) has been pasted outside the Damarwala building and Shabnam guest house asking the occupants to vacate it. The notice says that Kaskar has been occupying the dilapidated building at the risk of the life of all the occupants. “You continue to put your life in danger by residing in a damaged building,” it said.

Earlier this year, the Appellate Tribunal for Forfeited Property had given the central government an approval to take over Dawood Ibrahim’s two properties located in south Mumbai. The tribunal had declared both properties as ‘illegally acquired’ and approved their takeover under SAFEMA Act.

Kaskar was arrested but granted bail in an extortion case in February 2015. The J.J. Marg police station had registered a case against him after a real estate agent, Mohammed Salim Shaikh, filed a complaint alleging that Kaskar and his men assaulted him and demanded `3 lakh. Kaskar and two others were booked. Meanwhile, the issue of Hussaini building collapse was discussed in the BMC house on Thursday. The Shiv Sena alleged that the mishap occurred due to damaged pillars of the ground floor. Sena group leader Yashwant Jadhav said, “The sweet shop owner at the ground floor damaged pillars due to which the building collapsed. Despite the building being declared dangerous in 2011, the trust entrusted with the area’s redevelopment had rented the place to the sweet shop and a nursery,” he alleged.