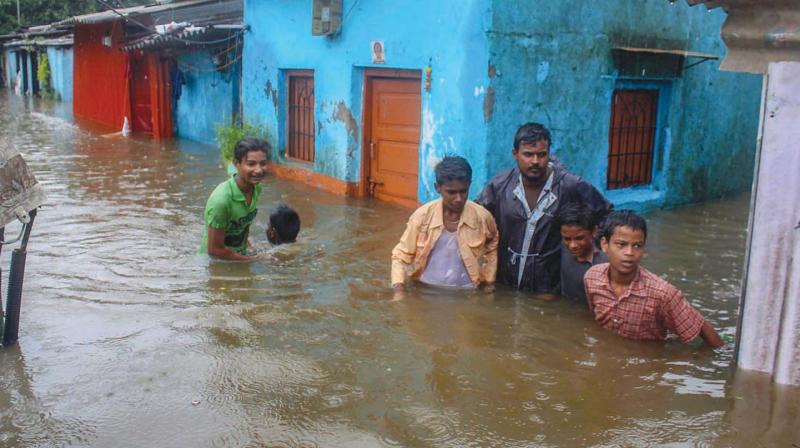 People make their way through a water-logged street after heavy rains, in Kalyan, Mumbai on Saturday. (Photo: PTI )

Mumbai: Heavy rains lashed maximum part of the city on Saturday resulting in water-logging in many parts including Mulund, Bhandup, Malad and Powai among others.

The Indian Meteorological Depart-ment (IMD) has issued a warning for ‘very heavy’ rains for the next five days in Mumbai and Konkan Goa.

IMD officials have stated that on Saturday highest rainfall was recorded in Ghatkopar and Mulund as 96mm and 80.80mm respectively. Meanwhile, the Thane district too was not spared, as the levels of Ulhas River rose sharply in the morning, flooding areas of Kalyan and Dombivli, affecting Milap Nagar severely. A team from disaster management was deployed at the site to control the situation.The IMD data shows that the city received an average of 40mm to 60mm rainfall on Saturday till 2:30 pm.

Meanwhile Thane received over 76mm of rainfall in 24 hours, according to the Thane Municipal Corporation’s (TMC) data.

Torrential rains in Thane city led to flooding in various parts including Bhiwandi and Vandana ST station road where cars were almost submerged in water. Palghar district witnessed similar situation where traffic was jolted and people were seen wading through the water accumulated on the roads.

Severe water-logging was seen in parts of Navi Mumbai including Sion-panvel highway. Traffic was disrupted on Nashik highway and Mumbai-Goa Expressway.

An official of disaster management unit  of Ma-harashtra government said that Mumbai-Goa Expressway was closed down at around 12.00 pm as the Jagbudi river was over-flowing and was opened at 7.00 pm.