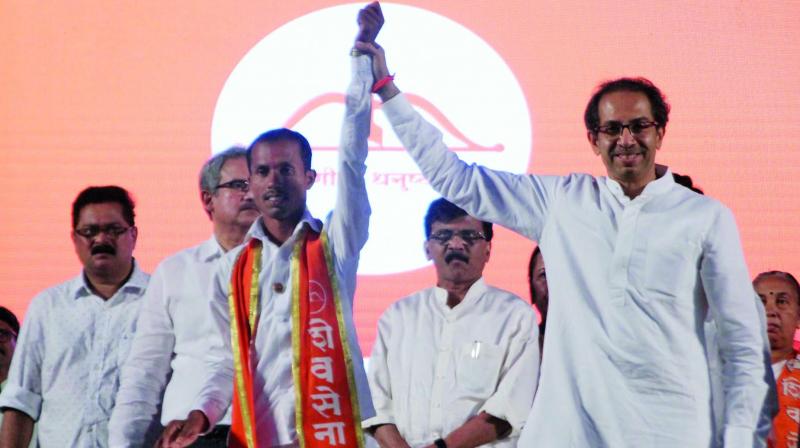 Mumbai: Shiv Sena chief Uddhav Thackeray declared Shrinivas Vanaga as the Sena candidate from Palghar in the Lok Sabha 2019 elections in a public meeting there on Thursday.

Mr Thackeray’s move indicates that party will go it alone in the upcoming elections, despite the attempts of BJP president Amit Shah — who visited the Sena leader, among other prominent personalities, at his home Matoshree on Wednesday — to cobble together an alliance for the elections.

Mr Thackeray slammed the BJP-led Central and state government, which he claimed have been taking the land of farmers for projects, in spite of the Shiv Sena’s opposition. Mr Thackeray said, “The Shiv Sena is with the people and it made this clear to Mr Shah in yesterday’s meeting.”

Mr Thackeray thanked the people for their support during the rally. He said, in that in a short period Mr Vanaga had fought the elections well and the fact that he lost to the BJP candidate was not a defeat because there were many problems with the election commission’s machinery, which occurred on the day of polling and the commission “ignored the complaints of the party”.

Referring to the bullet train, Vadhavan port and other ambitious projects, Mr Thackeray said, “Will (the government) take cognisance (of protests) after violence or will a few people be killed in agitations like in Tuticorin? Is it a democracy?”

Mr Thackeray was referring to the violence that took place on May 22 2018 in Thoothukudi district when paramilitary and police forces fired onto anti-Sterlite factory protesters, killing 13.