The raids were carried out late night Wednesday by a team of Thane crime branch, which also searched Pal’s residence. 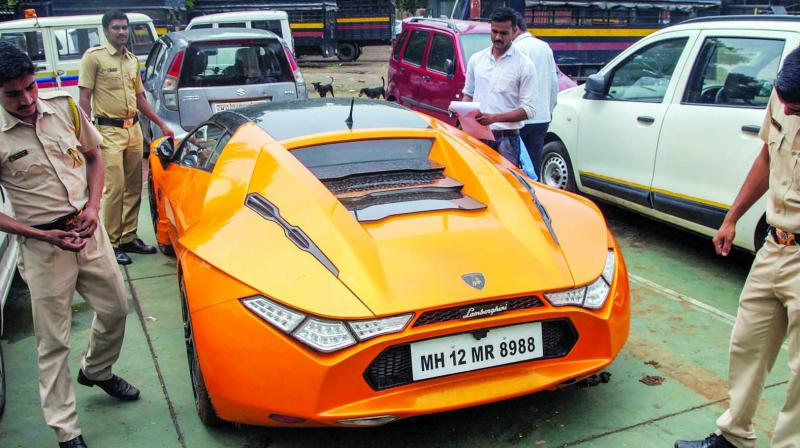 Mumbai: The Thane police on Thursday seized Lamborghini and Mercedes cars belonging to cryptocurrency case accused, Amit Lakhan Pal. The police raided his apartment at Palm Beach road in Navi Mumbai, and also seized Rs 3 lakh in cash and around one lakh of gold.

The raids were carried out late night Wednesday by a team of Thane crime branch, which also searched Pal’s residence. The officials said that cash was kept in his cupboard along with the ornaments. The police has also frozen Pal’s bank accounts and scrutiny of the same is underway.

A Thane crime branch officer said, “The Lamborghini is modified by a famous car designer and Pal has spent several lakhs on it, too. Both vehicles are worth around a crore. The source of funds for these vehicles, and the papers of the vehicles will be scrutinized to ascertain the ownership.”

As reported earlier, unit 1 of the Thane crime branch busted the fake crypto-currency racket, pegged to be worth more than `500 crore, and arrested Pal’s technical head, Mumbra-based Taha Kazi (26), last week. The investigators said that despite being a Class 8 pass, Pal got himself a fake PHD certificate of Auckland university in New Zealand. Pal is said to be holed up in Dubai.

“We will take all necessary steps to get Pal and bring him back to India,” said Param Bir Singh, Thane police commissioner. According to the police, Pal launched his crypto-currency business, Money Trade Coins (MTC) in a lavish event in Dubai in September 2017. The event was attended by the royal family there.

On the lines of an IPO, Pal rolled out the “Initial Coin Offer” with the option of redeemable crypto-currencies. The ICO was for USD 3 and he promised that the money would increase to USD 2,500 dollars. Pal increased the rates to USD 6,000 at one point while keeping the selling rights with himself so that no one could make profits by selling their MTCs. In this manner, he duped at least 25,000 persons to the tune of over `500 crore.

Five persons, including Pal and company’s finance head, are on the run.