BMC gears up for heavy rainfall in coming days

Civic officials have been instructed to work on Saturday and Sunday owing to heavy rainfall alerts from June 9 to June 11. 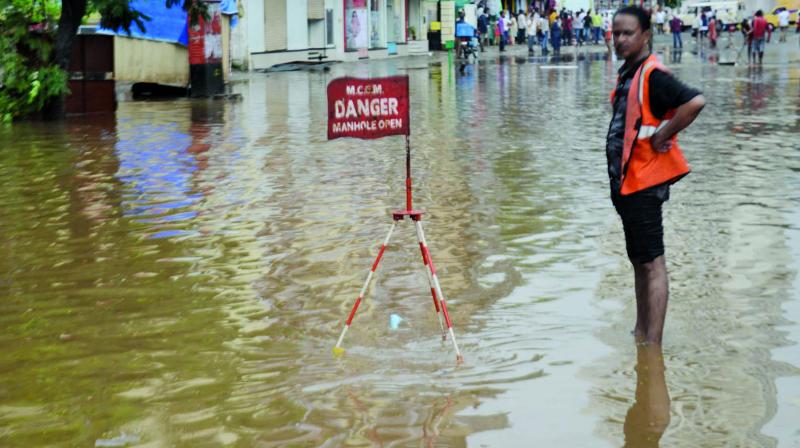 A BMC worker stand guard near a manhole at a waterlogged street near Hindmata, Parel.

Mumbai: Following the advisory issued by the Indian Meteorological Department (IMD), the Brihanmumbai Municipal Corporation (BMC) has geared up to ensure smooth flow of traffic and minimum inconvenience to citizens. Civic officials have been instructed to work on Saturday and Sunday owing to heavy rainfall alerts from June 9 to June 11.

Meanwhile, Thursday's downpour resulted in waterlogging at Hindmata and S.V. Road. Trains were delayed by 20 minutes in the morning, and a few flights had to be diverted. The IMD has warned of heavy rain and thunder over the next 48 hours and has advised residents to stay indoors.

The city witnessed pre-monsoon showers on Thursday. According to the IMD, the Colaba observatory recorded 35.8 mm and the Santacruz observatory recorded 18.8 mm rainfall between 4am and 8.30am Thursday morning. The weather bureau has issued an “extremely heavy” rainfall alert for the city from June 9 to 11 (Saturday to Monday), and has asked citizens to stay indoors as much as possible on these three days.

Deputy director general, western region, IMD, K.S. Hosalikar, told The Asian Age, “These are pre-monsoon showers. The city will witness the actual monsoon within 72 hours. Between Saturday and Monday, maximum intensity of rainfall is expected in the city and surrounding areas, with heavy to very heavy rain. There is a possibility of extremely heavy rainfall in isolated areas.”

As a precautionary measure, the civic body has deployed the navy at locations including  Colaba, Worli, Ghatkopar, Trombay, Malad etc. The teams will be responsible for tackling flood-like situations. “We have also deployed three teams of the National Disaster Response Force (NDRF) that are equipped with walkie-talkies and flood rescue equipment. These teams are stationed at the Andheri Sports Complex in the western suburbs, Mankhurd fire station in the eastern suburbs and at CIDM, Parel. In addition to this, the Mumbai Fire Brigade (MFB) teams are pre-positioned at six regional command centres. BMC schools of all 24 administrative wards will be open as rain shelters for citizens.