The deceased include seven men, two women and a minor boy. 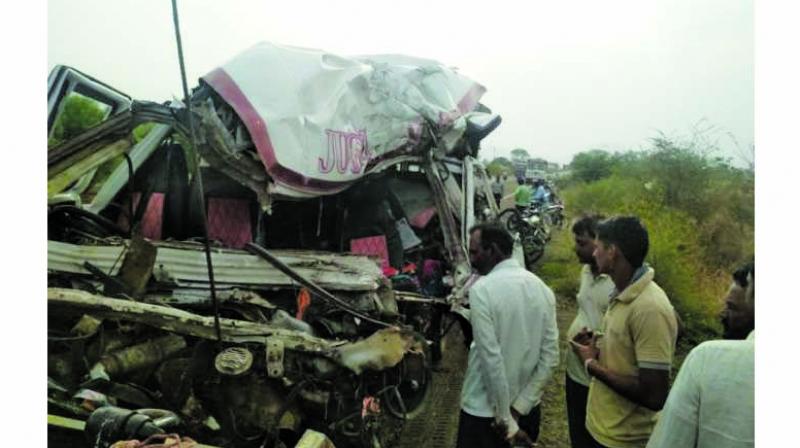 The mangled remains of the bus after collision.

MUMBAI: Ten pilgrims died while 13 others were injured in an accident on the Mumbai-Agra highway near Nashik. The mishap took place near Chandwad early morning Thursday, when a minibus carrying 22 passengers back to Ulhasnagar from a pilgrimage of Ujjain, Madhya Pradesh, rammed into a sand truck after its front tyre burst suddenly. The deceased include seven men, two women and a minor boy.

According to sources, the accident took place near Chandwad’s Adgaon village, at Sogras Phata on the Mumbai-Agra national highway at 5.50am on Thursday, when the Sai Travels bus (MH-05-CK-357) was on its way back from Ujjain. The group, staying in the Kalyan-Ulhasnagar belt, visited Omkareshwar temple in Ujjain earlier this week, and started its return journey from Ujjain at 9.30pm on Friday.

An official said that when the bus was near Adgaon village, its tyre burst following which, the driver lost control over the vehicle and rammed into a sand truck which was also stationary since it had a a punctured tyre.

A police source said, “The accident was so massive, that 10 persons were killed on the spot, while 13 others were injured. Of those injured, five are said to be in a critical state. The injured are recuperating in the civic-run Chandwad Civil Hospital in Nashik.”