Issued in Marathi, the advisory mentions that drivers should not drive across bridges over rivers which are in spate during the monsoons. 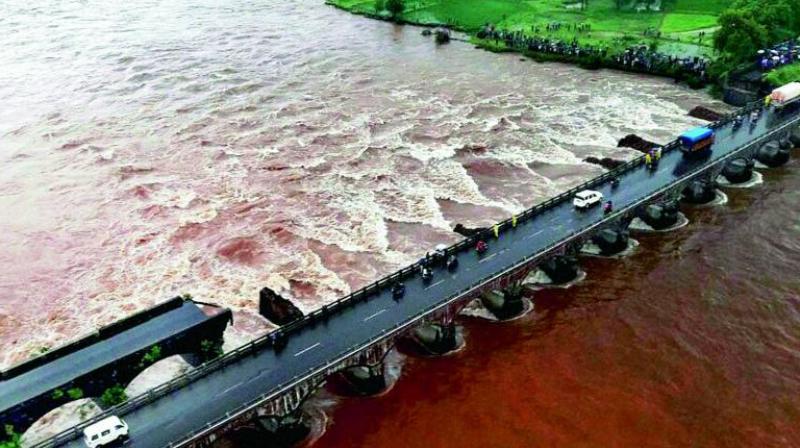 The remaining portion of Mahad-Poladpur bridge which was washed away in flood water of Savitri river on the Mumbai-Goa highway in Raigad district on Wednesday.

Mumbai: After the Mahad bridge collapse last monsoon, the Maharashtra State Road Transport Corporation (MSRTC) has issued an advisory to all its drivers across the state to drive with the utmost caution on bridges built over water bodies. The advisory was sent on Tuesday to depots across the state where drivers were given detailed standard operating procedures (SOPs) about driving during turbulent weather.

Issued in Marathi, the advisory mentions that drivers should not drive across bridges over rivers which are in spate during the monsoons.

The advisory comes in the wake of reports of locals having seen water from the Savitri river flow onto the bridge right before it coming crashing down, killing 28 people in the Rajapur-Mumbai MSRTC bus and Tavera car.

It further states that  the drivers should not under any condition try to overtake vehicles while on bridges, apart from keeping a safe distance from vehicles ahead and behind. It also instructs the drivers to keep check the water on the surface of the bridge, whether it is simply the water collected due to rain or the water seeping from the river below.

The advisory goes on to say that if drivers feel the water is seeping from below, they must keep the bus’ speed to the minimum and slowly make their way across the bridge.

A senior MSRTC officer said, “We are trying to make sure that these SOPs are grilled into drivers so that they are alert while driving during the monsoon, especially in the Konkan region where monsoons are infamous.”

The Mahad tragedy that took place in August last year had drowned a bus full of passengers. Eighteen people remain missing even today.