The MMRDA is carrying out the structural audit of FOBs on the Western Express Highway with the Virmata Jijabai Technical Institute (VJTI). 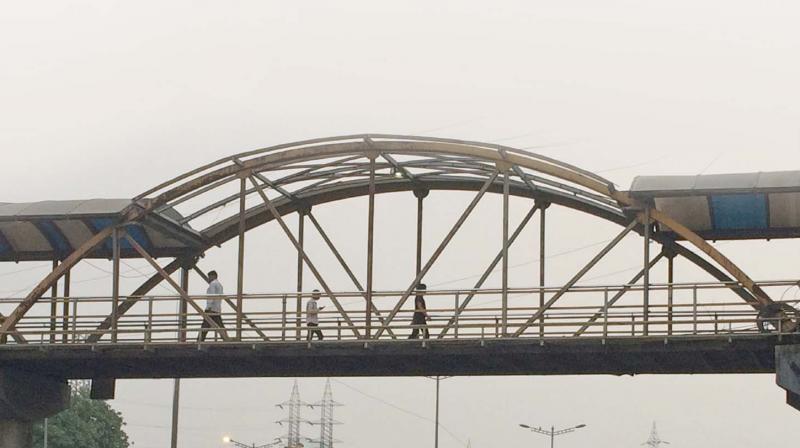 The MMRDA will also undertake the beautification of medians and spaces below flyovers on both highways. The commissioner has given orders for the speedy provision of various signages on the highways.

Mumbai: Amidst of the scrorching summer heat, the Mumbai Metropolitan Region Development Authority (MMRDA) on Tuesday ordered the removal of roofs from all the 21 foot overbridges (FOBs) on the Eastern and Western Express Highways in order to strengthen them.

According to a statement by the MMRDA, the weight of the roofs have weakened the structures. The metropolitan commissioner has also ordered that no advertising boards be put up on the FOBs.

The metropolitan commissioner, R.A. Rajeev, gave the order on Tuesday.

According to Mr Rajeev, the roofs of FOBs looked very shabby. The removal of roofs and abstaining from putting advertisement boards will reduce the load on FOBs. He further said that all the FOBs would be painted white and grey.

The MMRDA will also undertake the beautification of medians and spaces below flyovers on both highways. The commissioner has given orders for the speedy provision of various signages on the highways.

The Maharashtra State Road Transport Corporation (MSRTC) has also decided to carry out repair and refurbishment work  on the 1,135-metre-long Sion flyover, including the replacement of 170 shock absorber bearings, which has been pending since the past year. The Indian Institute of Technology — Bombay (IIT-B) has suggested that the MSRTC do the repair work after a structural audit.

An audit conducted by the Brihanmumbai Municipal Corporation (BMC) has revealed that six FOBs earlier recommended for minor repairs, have been declared dangerous for use by the civic body. These bridges are from Western and Eastern Express Highways, claimed a news channel report.

The BMC swung into action to reassess conditions of FOBs after Himalaya Bridge, the FOB connecting footpath at BMC head office with Chhatrapati Shivaji Maharaj Terminus (CSMT), collapsed on March 14. The incident resulted in death of six persons and injuring several others.

Names of these FOBs have not been revealed so far.

However, the news report said that bridges apart from FOBs, which have been declared as dangerous, are all railway foot overbridges, including Elphinstone Road Bridge, Grant Road Bridge, and Tilak Bridge.

Concerned officials were directed to carry out a structural audit of over 200 FOBs across the city of Mumbai in the wake of the collapse of Himalaya Bridge. The findings prompted authorities to demolish as many as 16 out of 18 dangerous bridges.

Repairing works have been started on the 16 bridges whose proposal got sanctioned by the BMC amid election Model Code of Conduct citing it urgent and important. The BMC had completed an audit report of these bridges.

The administration had tabled the proposal with the estimated cost of Rs 13.40 crores, which was kept aside by the standing committee on March 27 and later approved on April 4.