He was detained in Aurangabad by the Gujarat ATS. 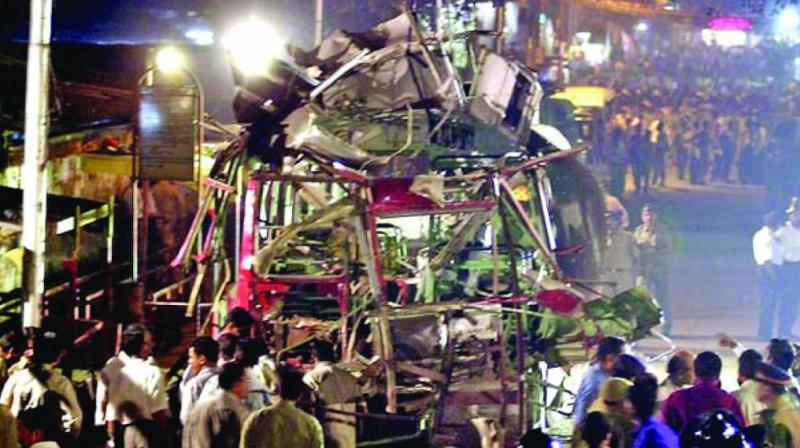 The bomb blasts had resulted in a loss of public property worth around Rs 5,33,650.

MUMBAI: Fifteen years after he was accused of playing a key role in the December 2002 Ghatkopar blast conspiracy, in which a bomb went off in a BEST bus, killing two persons, Irfan Qureshi was detained on Sunday evening in Aurangabad by the Gujarat Anti-Terrorism Squad (ATS). He was then handed over to a Mumbai crime branch (CB) team. Acting on a tip-off, the Gujarat ATS team had laid a trap near Qureshi’s relative’s house and then arrested him. Qureshi's house is where the conspiracy of carring out the attack was finalised across several meetings, said a top Maharashtra police source.

“As per records available on his role in the blast case, his house is where the meetings took place to execute the blast. He will be interrogated to find out details of the conspiracy,” said the source.

According to the source, the CB took Qureshi’s custody as the case had been probed by it. Apart from the two deaths, the blast caused injuries to around 50 other persons. According to the police, the attack was allegedly carried out to avenge the loss of Muslim lives in the Gujarat riots.

According to CB sources, the Gujarat ATS had received a tip-off that Qureshi, who was hiding in Oman, was coming to India to attend a religious ceremony near Aurangabad. Immediately, the Gujarat ATS officials contacted a top Mumbai police officer, who ordered the CB officials to leave for Aurangabad. As per the plan, the joint team raided Qureshi's home in Aurangabad’s Shah Colony and he was arrested.

According to sources, Qureshi allegedly provided intelligence on how to move about in Mumbai to conduct reconnaissance and execute the attack before fleeing undetected. In the attack, the bomb had been placed in the rear of the bus.

The bomb blasts had resulted in a loss of public property worth around Rs 5,33,650.  Out of the nine accused arrested in connection with the blast, one was discharged and eight were acquitted. The state government has challenged their acquittal in the Bombay high court, which is pending.