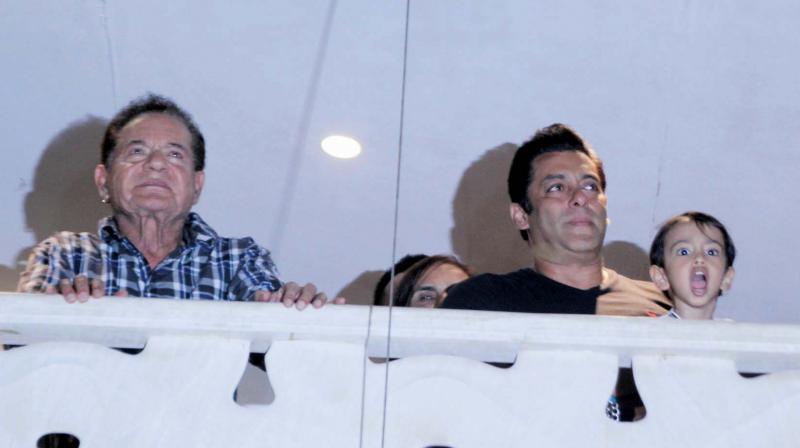 Bollywood actor Salman Khan on his way to Mumbai after being granted bail and released from the jail on Saturday. (Photo: Mrugesh Bandiwadekar)

Mumbai: As the Jodhpur magistrate court granted actor Salman Khan bail in the 1998 blackbuck poaching case, in which he has been sentenced to five years in jail, his fans began celebrating his release from jail. The scene outside the actor’s home in Bandra’s Galaxy Apartments on Saturday afternoon was one of joyful frenzy. His fans from various part of the country gathered outside to greet him. They came with dhols and nagaras and danced outside his house. Many held banners in their hands as chants of Bajrangi Bhaijan” and “Salman zindabad” rent the air. They also sang songs from his film.

Heavy police bandobast was seen outside Galaxy Apartment. Five police vans and a jeep were deployed outside the actor’s home. The reserve police forces were also seen on duty.

At 8.10 pm, Salman reached home to thousands of fans blocking the road in front of his apartment. Everybody’s mobile phones were out and as the crowd waited to capture one glimpse of Salman. The police personnel had a tough time controlling the mob. Even the actor’s female fans were seen sloganeering and whistling as he made his way home.

At 8.25 pm Salman Khan came out to the balcony of his house and waved to his fans, thanking them for their support. Flanked by his father Salim Khan, mother Salma and his bodyguard Shera, the actor who was clad in a black T-shirt, then requested all his fans to go home and sleep quietly.

Salman admirer WasimAnsari had come all the way from Nagpur. Ansari said that he would return home only after the actor returns home. Another ardent fan, Chandraditya Sharma, who had come all the way from Guwahati, said: “Salman has done lots of charity for the poor and the handicapped. So he should not be put behind bars. There are many businessmen, who have duped big money from banks and fled from the country, but the government has failed to bring them back.”

Yet another fan, Khusbu Singh, a college student, told The Asian Age that “I have been visiting Galaxy Apartment for the last three days to support him. Salman is not only superstar but also a good human being.”