BMC stumbles upon milestone dating back to British Raj

There are about 15 British Raj milestones in the city from Kalbadevi to Mahim. 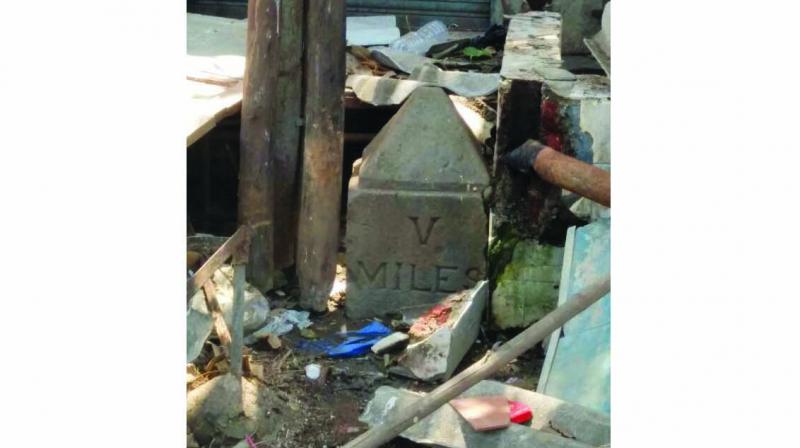 Mumbai: A milestone dating back to the British Raj, which had vanished into oblivion, has been found by the Brihanmumbai Municipal Corporation (BMC) while carrying out a drive against illegal structures at Parel on Friday. The stone marks the distance of five miles, as it has the Roman numeral ‘V’ and the word ‘miles’ clearly written on it.

According to the civic officials, the milestone was found by the F-South ward officials during a demolition drive undertaken at SA Rao Marg near the KEM Hospital. The stone is in a good condition, but the constructions around it had made it very difficult to spot. The original inscription reads V miles from St. Thomas’s Church.

There are about 15 British Raj milestones in the city from Kalbadevi to Mahim. They are made up of basalt stones, which were originally three or four feet tall. They mark the miles from St Thomas’s Church (today St Thomas’s Cathedral) which in the eighteenth century was situated at the city’s centre.

They are grade-I heritage structures, which have inscriptions citing the location, landmark, date and remarks on the condition of each stone.

However, several of them have been allegedly removed, submerged or demolished by the residents or the road widening projects.

Vishwas Mote, assistant commissioner of F-South ward, said, “The demolition drive was carried out to clear the footpath on the SA Rao road on Friday morning when the officials found the milestone. We will restore this heritage structure by erecting a railing around it.”