Palaniyandy, whose home town is Sathiyamangalam in Pudukkottai district in Tamil Nadu, lived in Singapore with his wife and children. 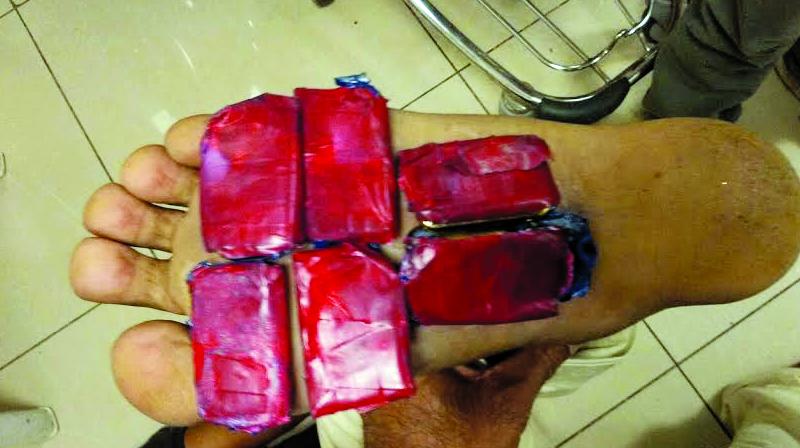 The gold bars seized from the accused weighed around 100 grams each.

Mumbai: The Air Intelligence Unit (AIU) officers on March 6 intercepted a man who tried to smuggle 12 gold bars into the country, at Mumbai Airport. He had tied the gold bars to his heels with the help of adhesive and two socks. A case has been registered against the alleged smuggler, Thiruppathy Palaniyandy. Palaniyandy, an architectural supervisor by profession, had acquired the gold from Singapore, where is was employed, and was supposed to deliver it to someone in Mumbai.

Palaniyandy, whose home town is Sathiyamangalam in Pudukkottai district in Tamil Nadu, had arrived from Singapore by Air India flight AI 343. The gold bars seized from him weighed around 100 grams each.

An AIU official informed The Asian Age that Palaniyandy earns Rs 150000 per month. He admitted that the gold he was carrying belonged to a person named Mr Muru of Singapore and he was going to hand it over to someone in Mumbai.

For delivering the gold bars to a person in Mumbai, Palaniyandy was promised Rs 40,000 and free airline tickets. The passenger, who is settled in Singapore with his wife and two children, had earlier smuggled gold twice and allegedly found it to be an easy way to earn money.

According to AIU officials, he pleaded with them to not inform his family about the smuggling incident, as they knew nothing about his illegal activities.