Guard and assistant loco-pilot removed the piece before taking the train forward, thus delaying it by 15 minutes. 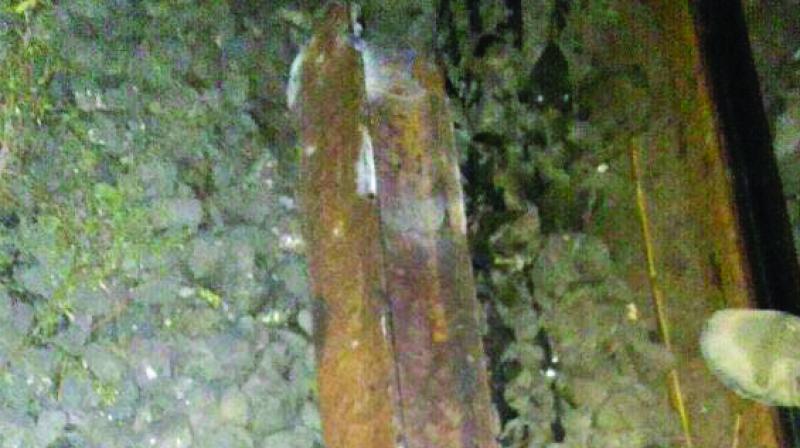 The five-feet-long piece of rail piece that got stuck between the wheel and track of the Santragachi Express.

Mumbai: In another incident putting passenger lives at risk, a five-feet-long rail piece got stuck between the wheel and track of the Santragachi Express that runs through Panvel between Kalamboli and Taloja station on Monday evening.

No passenger was injured. However, railway sources said that at around 7.45pm, the loco-pilot and guard felt a thud as the engine ran over the rail piece, bringing the train to a halt only to find out that the steel rail piece had been mangled under the train. The guard and assistant loco-pilot removed the piece before taking the train forward, thus delaying it by 15 minutes. However, the incident has once again raised concerns over safety of train passengers. An official said, “The loco-pilot informed the driver about the incident who then informed local police who came to the spot as well.”

Santragachi Express starts from Pune, takes a halt at Kalamboli and Panvel before making its way to Santragachi station in West Bengal. Assistant commissioner of police zone 2,

Panvel, Prakash Nilewad, said, “The station master called us and we were on the spot. There were a lot of rail pieces along the side of the tracks but we did not know the intention behind this and are investigating into it.”

This is the second such incident within a fortnight where a piece of rail has been kept right on the tracks. Earlier on January 24, the loco-pilot of Jan Shatabdi from Dadar to Madgaon averted a disaster when he spotted a 400kg rail piece carefully laid across the tracks near Diva. ATS has looked into the possibility of it being a terrorist activity.