Sena leader Aaditya Thackeray also condemned the banner, saying it is wrong if it means free Kashmir from India. 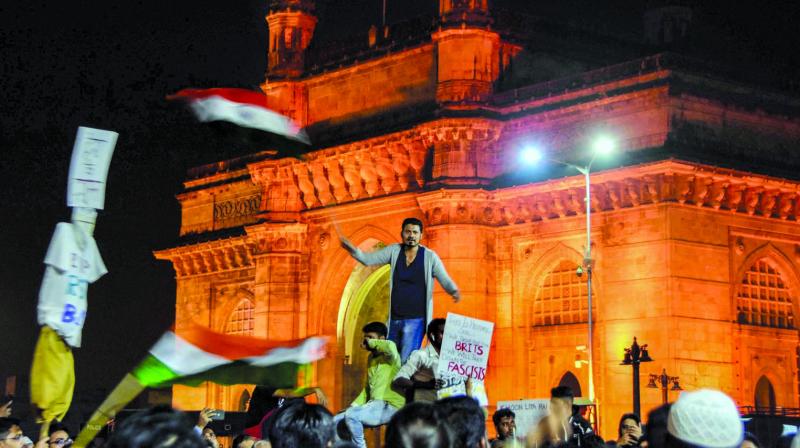 Students protest at the Gateway of India to condemn the attack on the students of JNU, in Mumbai, early Tuesday. (Photo: PTI)

Mumbai: The Mumbai police on Tuesday booked Mehek Mirza for displaying a ‘Free Kashmir’ banner during a protest at the Gateway of India.

The ‘Free Kashmir’ placard sparked off a controversy, with the BJP trying to corner chief minister Uddhav Thackeray over it calling it an “anti-India campaign”.

The Sena, however, said that the banner indicates that Kashmir wants freedom from the ban on the Internet and other restrictions. The said banner surfaced at the Gateway of India, where thousands thronged to protest the attack on students and teachers at the Jawaharlal Nehru University (JNU) in New Delhi.

Objecting to the banner, former chief minister and BJP leader Devendra Fadnavis tweeted, “What is the protest for exactly? Why are there slogans of ‘Free Kashmir’? How can we tolerate such separatist elements in Mumbai? ‘Free Kashmir’ slogans by the Azadi gang just 2km from the CMO? Uddhav Thackeray, are you going to tolerate this ‘Free Kashmir anti-India campaign right under your nose?”

On his part, Sena MP Sanjay Raut claimed that the poster indicates that the Kashmir Valley wants freedom from the ban on the Internet and other restrictions placed on Jammu and Kashmir ahead of the government’s decision to abrogate Article 370.

However, he was quick to add that if the poster means Kashmir is seeking freedom from India, “it will not be tolerated”.

Sena leader Aaditya Thackeray also condemned the banner, saying it is wrong if it means free Kashmir from India.

Responding to Mr Fadn-avis, senior minister Jaya-nt Patil accused him of trying to confuse the people by “decoding words in a hateful manner”.

He asked, “Mr Fadnavis, it’s ‘free Kashmir’ from all discriminations, bans on cellular networks and central control. I can’t believe that a responsible leader like you is trying to confuse the people by decoding words in such a hateful manner. Is it losing power or losing self-control?”

Mr Fadnavis hit back saying that for them, the nation comes first and that he did not expect “vote bank politics” from Mr Patil. “What a pity! Now separatist tendencies get a government advocate. Mr Patil, this vote bank politics is not expected from you. Kashmir has already been freed from discrimination and certain curbs have been there since decades for security concerns. Be it in government or the Opposition, for us, the only principle is nation first!” he tweeted.

Meanwhile, Ms Mirza claimed that she only wanted to highlight the restrictions imposed in Jammu and Kashmir and had no other motive behind her action. “The motive behind holding the placard has been misinterpreted,” she added.

Hundreds of people, including students, women and senior citizens — who assembled at the Gateway of India at Sunday midnight — demanded action against the culprits and called for Union Home Minister Amit Shah’s resignation.

Violence broke out at JNU on Sunday night as masked men armed with sticks and rods attacked students and teachers and damaged property on the campus, prompting the administration to call in police that conducted a flag march.

At least 34 people, including JNU Students' Union president Aishe Ghosh, were injured as chaos reigned on the campus for nearly two hours.