The police had earlier registered 25 cases against the protesters. 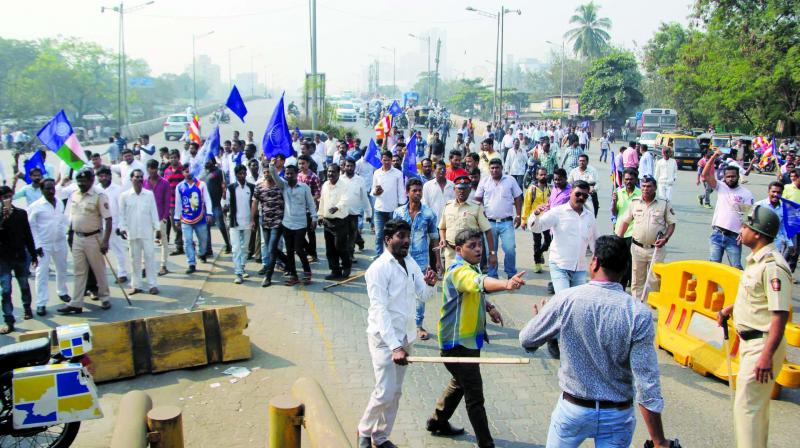 File image of a demonstration in the city.

Mumbai: The Navi Mumbai police, which has been looking into acts of violence and vandalism during the Maharashtra bandh that was observed on Wednesday, has registered a fresh FIR under provisions of the Atrocities Act in the APMC police station against certain persons who attacked protesters attempting to enforce the bandh at a market. The police had earlier registered 25 cases against the protesters.

On Tuesday, dalit outfits had called for a bandh a day after a person was killed and three others injured during violence that broke out at Bhima-Koregoan and surrounding villages near Pune, during celebrations to commemorate the 200th anniversary of the Battle of Koregoan.

According to the police, some members of a dalit group asked shop owners at the APMC market to close their shops on Wednesday. When some shopkeepers started dilly-dallying, the group assaulted them badly. “Members of the APMC shop owners’ association soon learned of this and gathered together to confront the mob. They them beat up some protesters, but the police immediately stopped them and de-escalated the situation.”

The APMC police has registered a case against the shop owners under the Scheduled Castes and Scheduled Tribes (Prevention of Atrocities) Act, 1989.