The Prime Minister and the home minister will stay at Raj Bhavan. 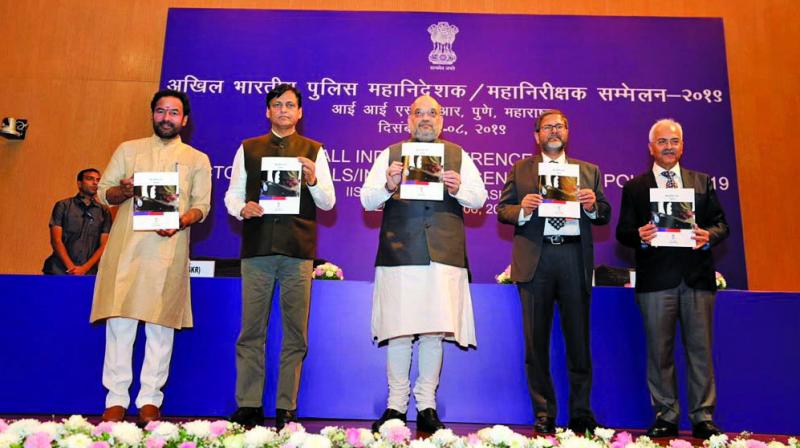 Home minister Amit Shah at the All India conference of DGs and IGPs in Pune. (Photo: AA)

Mumbai: Prime Minister Narendra Modi and Union Home Minister Amit Shah on Friday addressed the national conference of top police officials from across the country. The three-day national conference is being held at the Indian Institute of Science Education and Research (IISER) campus. The conference, which is held annually, is a closed-door event, which will conclude on December 8.

Chief minister Uddhav Thackeray and Leader of Opposition Devendra Fadnavis received the Prime Minister at Pune airport. According to sources, the trio held a brief chat after which the chief minister left for Mumbai, while Mr Fadnavis left for Nagpur. This was the first time that Uddhav met the prime minister after his party broke ties with long-time ally BJP. Mr Modi and Mr Shah will be staying at the Raj Bhavan in Pune.

National security adviser Ajit Doval, Intelligence Bureau chief Arvind Kumar, senior officers of home department and Director General of Police of all the states would attend the program. In the three-day programme, India’s security policies — both internal and external — will be reviewed and a new roadmap will be created for the next year.

The previous Congress-led government used to hold the annual meeting in Delhi but after the BJP-led government came into power in 2014, the meetings have been conducted across different states. Last year, the meeting was held in Gujarat in the premises of the ‘statue of unity’ — the grand statue of India’s first home minister Sardar Vallabhbhai Patel. Before Gujarat, the annual meetings were held at Guwahati, Kutch, Hyderabad and Gwalior.

Earlier in the day, the home minister had addressed the conference.

Meanwhile, Aberdeen in the Andaman and Nicobar Islands has been adjudged the best performing police station in the country while dealing with property offence, crime against women and weaker sections, the home ministry said. Balasinor in Mahisagar district of Gujarat has been selected the second best while Ajk Burhanpur in Burhanpur district of Madhya Pradesh the third best police station in the country.