The park also had boards displaying that the gathering should be noise free. 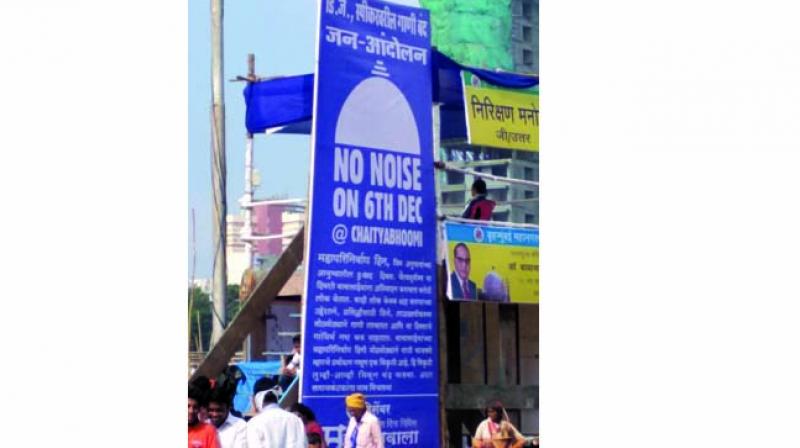 There is no arrangement for loudspeakers this year.

Mumbai: The Shivaji Park area saw a noiseless tribute to Dr Ambedkar on his death anniversary on Wednesday. In January this year, the Bombay high court had directed for no loudspeakers or sound amplifiers to be used at the venue. Every year, loudspeakers are used to play songs related to Dr Babasaheb Ambedkar. The followers readily accepted HC’s decision, as they believe that the day is meant to be a tribute and not a celebration.

“This year there is no arrangement for sound systems to play songs in the memory of Dr Ambedkar. We have realised that it is more of a gathering and not a happy occasion to play songs loudly and dance,” said Shilpa Sawde, a Thane resident who came to the gathering. The park also had boards displaying that the gathering should be noise free.

While a few followers were seen singing songs in groups as a tribute to Babasaheb Ambedkar, megaphones were used to direct followers to the food and medical stalls. “The followers and the civic authorities showed that how such functions can conducted peacefully and that they don’t need to be loud. It shows that people understand that noise is not an expression for gatherings,” said Sumaira Abdulali, founder, Awaaz Foundation.

Like every year, lakhs of people came down to the city to be a part of the gathering. Despite the unfavourable weather conditions across the Maharashtra coast and the warning of Ockhi cyclone did not stop them from coming to Chaitya Bhoomi.

“I have been coming every year to Shivaji Park for Dr Ambedkar. As our gathering only occurs once a year, people don’t care about the weather. This year, I am amused that this was the second rain since 1956 that I have witnessed on December 6,” said Satish Pawar, a follower from Akola.

Earlier in the day,  Chief Minister Devendra Fadnavis visited the Shivaji Park to pay homage to Dr. Ambedkar. The city's public transport wing, BEST undertaking, ran special buses between Dadar and Shivaji Park, an official said, adding that food stalls were also being put up to provide free snacks there. 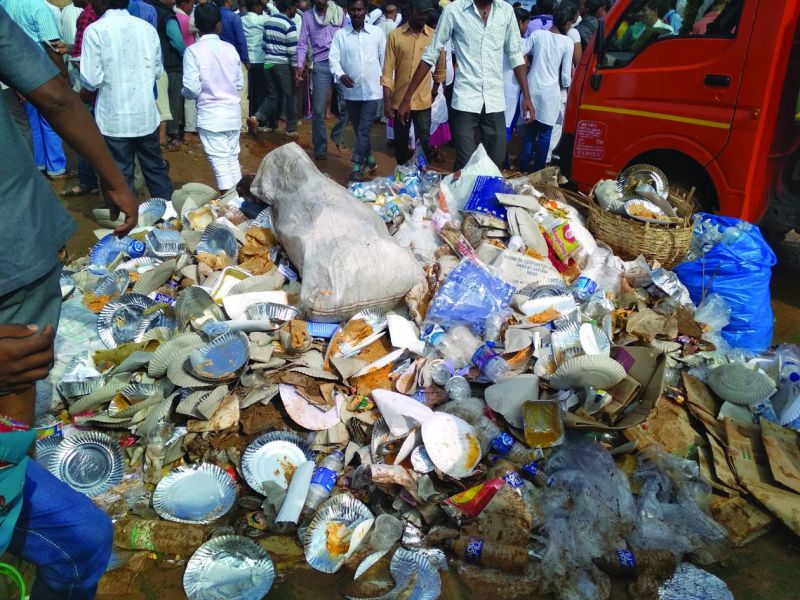 There was mounds of garabge all over Shivaji Park area on December 6.

Locals fume as garbage mounds dot Shivaji Park
While the gathering at Shivaji Park on the occasion of Dr Babasaheb Ambedkar’s 61st death anniversary was noise free, it lagged behind in cleanliness.

Though Brihanmumbai Municipal Corporation (BMC) trucks frequented the premises for garbage collection; there were hardly any provisions of dustbins, leading to heaps of discarded food and plates in and around the venue.

The Shivaji Park had several food stalls for Dr Ambedkar’s devotees who came for the gathering. While some of the stalls had a small basket for the plates and leftovers, the organisers at food stalls told The Asian Age that BMC had not provided them with any dustbins. “We requested the BMC to put large dustbins in the park to prevent littering, but they did not pay any heed to it. We got a small basket for people to dispose off their plates. However, many stalls didn’t do so,” said Gopal Shirke, volunteer at one of the food stall.

However, the BMC officials asserted that the trucks collected the plates regularly and the BMC workers were deployed to check upon the cleanliness in the park. The civic body had installed temporary sheds, mobile toilets and six medical stalls at Shivaji Park, Dadar station, Rajgriha (Ambedkar’s residence) and Kurla terminus in view of the huge rush of the Dalit icon’s followers.

Justice for Dalit boy
Ambedkar followers await justice for the allegedly killed Dalit boy in Khalda. Along with the tribute to Babasaheb Ambedkar, a group of followers from Ahmednagar came to offer their consolation to the 17-year-old Dalit who was allegedly killed for having an affair with a Maratha girl in Khalda village in 2014. The accused were released and the followers still wait for justice for Nitin Aage. “ The government has let us down as the accused are walking free now. In other communities, such accused persons are given stricter punishments. This was a cruel example of honour killing,” said Mahendra Bhadkar, a follower of Akola.