Claims to call it Dr Babasaheb Ambedkar Terminus in photos. 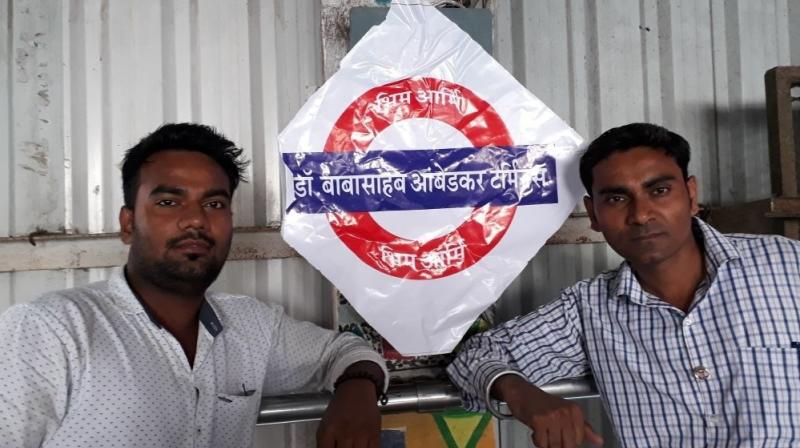 A photo circulated on social media that claimed Bhim Army had changed the name of Dadar station.

Mumbai: Activists from the newly-minted Bhim Army on Wednesday claimed to have plastered the Dadar station with posters of ‘Dr Babasaheb Ambedkar Terminus’.

However, the Central and Western Railways as well as the Government Railway Police (GRP) refuted Bhim Army’s claims. Samadhan Pawar, deputy commissioner of police, GRP said, “No such protests or incident occurred at Dadar railway station on the CR and WR side on Wednesday.

Photographs of Dadar railway station signboards allegedly being replaced by ‘Dr Babasaheb Ambedkar Terminus’ were being circulated on social media on Wednesday evening.

However, activists from the Bhim Army claimed that they had pasted the posters around 12 noon on platform number 6 on the CR line, from where outstation express trains arrive and depart.

“We have been demanding the renaming of Dadar station since long, but the process is getting delayed. Dr Ambedkar had his home here. His ‘Rajgraha’ is in Dadar. We do not want to harm anybody’s sentiments through this activity but want to convey this message to the government,” said Mahadu Pawar, spokesperson of the Bhim Army Mahrashtra.

According to the Bhim Army, the organisation has also communicated this to the union railway minister Piyush Goyal.

Ravindra Bhakhar, public relations officer, Western Railways said that he was unaware of any such incident. “But if any posters are pasted we will remove them. Any organisation has to take our permission for putting any messages or posters in the railway premises. Nobody has approached us for permissions in this case,” Mr Bhakhar said.

Dhananjay Yadav, staff member of Central Railways too said that no such incident occurred. “The higher authorities did not have any information on any such posters. After we got the forwarded photos, we checked the station found nothing,” he said.