All eyes on today’s council bypolls

The opposition leaders have made strategies to prevent cross-voting. 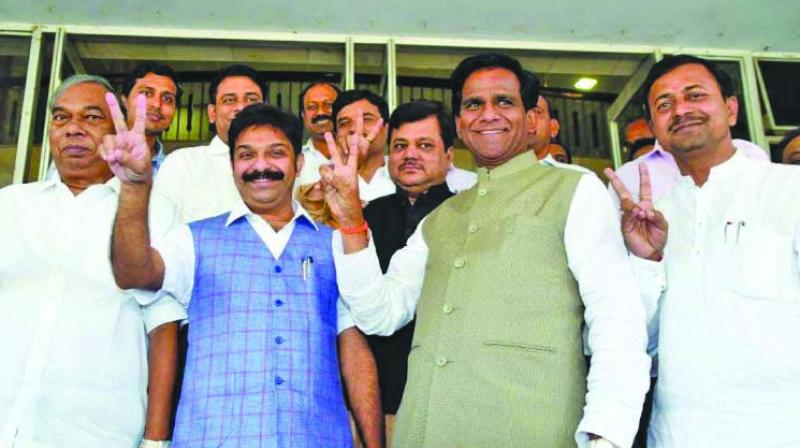 The BJP has fielded Prasad Lad for the Maharashtra council bypoll.

Mumbai: The BJP-Shiv Sena alliance has an upper hand in the bypoll for the state legislature on Thursday. However, it will be interesting to see if any cross-voting for the BJP candidate, Prasad Lad, happens from the ranks of the opposition Congress-NCP camp. The seat was vacated after former Congress leader Narayan Rane quit and launched his own political party recently. The opposition leaders have made strategies to prevent cross-voting.

The council seat belonged to the Congress as Mr Rane was the MLC from the seat. However, after he vacated the seat, the present situation goes in favour of the BJP. The saffron party’s Mr Lad has received support from Sena which makes the vote tally for the candidate around 185 (BJP has 122 MLAs and Sena 63). There are independent candidates also who will support the BJP. This will make the position of Mr Lad stronger than the Congress-NCP candidate.

On the other hand, the Congress has 42 and NCP 41 and a few more MLAs from other parties. However, the opposition will not have sufficient votes to get their candidate elected. Congress candidate Dilip Mane will have to struggle for the votes.

The opposition worry that they might lose some votes to the ruling party candidate. It will also get clear on the polling day if Mr Rane’s son Nitesh and his supporter Kalidas Kolambkar vote in favour of the BJP or Congress. Though Mr Rane has quit the Congress, Nitesh is still with Congress.

There was buzz that the BJP would support Mr Rane, however the Sena opposed Mr Rane’s candidature. Hence, the BJP opted for Mr Lad whose name was agreed and supported by the Sena.