During his visit, Admiral Lanba was briefed by the western naval command officials about the situation on the ground. 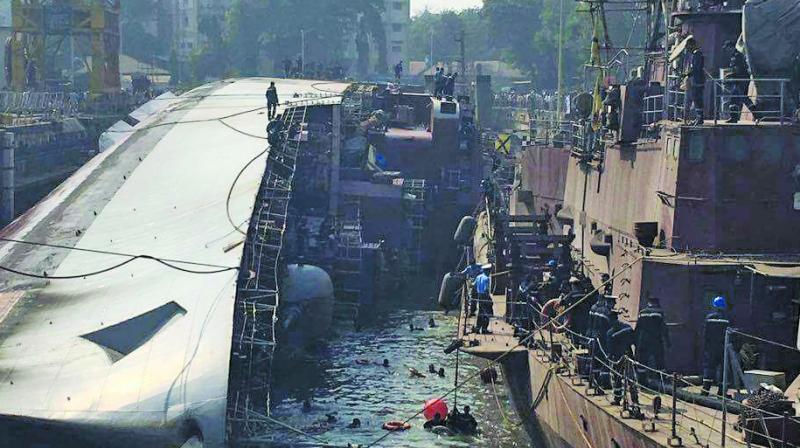 INS Betwa tipped over on Monday at the naval dock.

Mumbai: Chief of Naval staff Sunil Lanba paid a visit to the naval dockyard Tuesday morning to inspect the damage sustained by INS Betwa, following the Monday accident. According to navy sources, at the time of the incident more than 100 people were stranded inside INS Betwa, Navy’s missile frigate that tipped over and crashed to the ground. To rescue the 100 people, naval officials drilled four holes in the frigate to lift them up. Diving teams entered from these holes and lifted the officers and navy men stuck inside.

During his visit, Admiral Lanba was briefed by the western naval command officials about the situation on the ground. Admiral Lanba directed that the ship, in due course of time, be made upright and refitted to rejoin the fleet.

Highly placed Navy  sources said one person out of the 16 injured was critical. Two navy personnel were killed in the accident when the warship which was being refitted toppled over.  According to sources, a few specialists are likely to reach Mumbai on Wednesday to investigate the matter, and are expected to complete their initial assessment within two days. Meanwhile, a team is investigating the incident, which is being led by a rear admiral, said sources. Rear Admiral Deepak Bali FODAG (Flag Officer Offshore Defence Advisory Group) will also visit Mumbai, said sources.