PM Narendra Modi in 2015 carried out bhoomi pujan for constructing the biggest ever memorial of Dr Ambedkar at Indu Mill in the city. 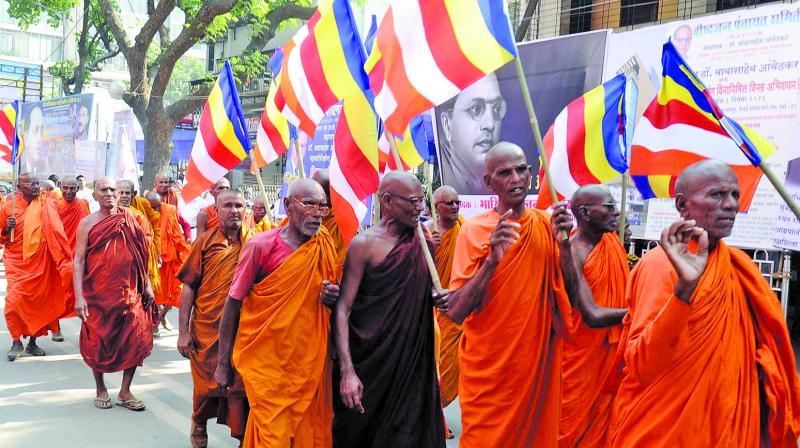 Mumbai: All roads led to Chaitya Bhoomi near Shivaji Park on Tuesday, December 6, as lakhs of followers from all over the state descended upon Dr Babasaheb Ambedkar’s memorial to pay their respects to the architect of the Indian constitution on the occasion of his 60th death anniversary.

Bhandup resident, Ramesh Ingle, said, “I was standing in the queue since Monday evening; it had started all the way from Prabhadevi. I visit the place every year with my family to pay tribute to Dr Ambedkar. It is respect for the man that brings me every year to this place, despite the fact that one has to wait long hours in queues.”

Prime Minister Narendra Modi in 2015 carried out bhoomi pujan for constructing the biggest ever memorial of Dr Ambedkar at Indu Mill in the city, however it is yet to see light of day.

Mr Ingle, a Buddhist by religion, said, “Many governments came and went but issues of erecting the memorial have become another political ploy for which promises are made but never fulfilled.”

Stalls selling everything from art and crafts to CDs and literature on Dr Ambedkar were seen lining the streets leading up to Chaitya Bhoomi. However, several owners were not so happy about volume of sales this year.

A bookseller Tukaram Bhosle said, “The one reason I see behind low sales is demonetisation of Rs 500 and Rs 1,000 notes. I think this year I have done only half the business I did last year.”