Maharashtra’s Siddhant Banthia won the Under-18 boys singles title with a 7-6 (0) 6-2 over Calvin Golmei from Chandigarh. 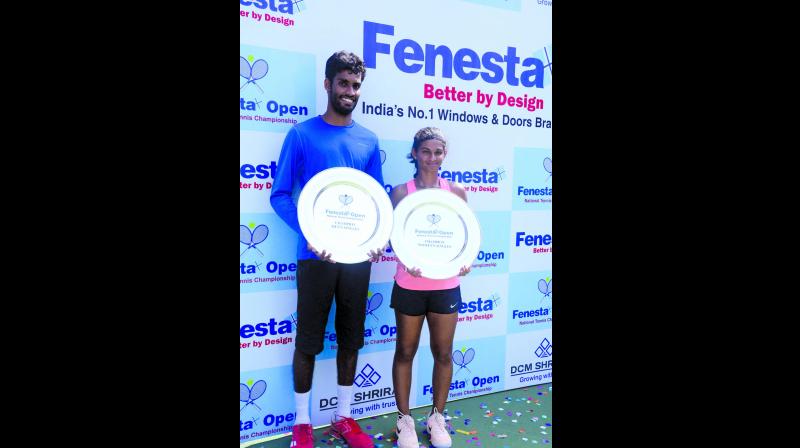 Left-handed Vishwakarma’s impressive run culminated with a 6-2, 6-7(2), 6-3 win over Kadhe, who is ranked 358 against a humble 1221st ranking of the new champion. The gap in ranking was huge but there was no gulf as far as quality of tennis was concerned with Vishwakarma dictating terms in the men’s singles final. The 23-year-old from Varanasi moved the Pune-based Kadhe, who was part of the Indian Davis Cup team in Serbia as a reserve member, on both sides of the court, with his deep and powerful returns.

Kadhe mostly put back short balls, which were easily sent back by Vishwakarma, who also used angles very effectively.

The winners received a prize money of `3 lakh each while the runners-up got Rs 2 lakh each. Former hockey captain Sardar Singh presented the shields to finalists.

Maharashtra’s Siddhant Banthia won the Under-18 boys singles title with a 7-6 (0) 6-2 over Calvin Golmei from Chandigarh.

Telengana’s Humera Shaik took the U-18 girls title with a 6-2 6-4 win over Rashmikaa S. Bamadipaty.