Ambedkar agreed to the idea of a grand alliance. “We are open to it, but the Congress will have to take a flexible stand. 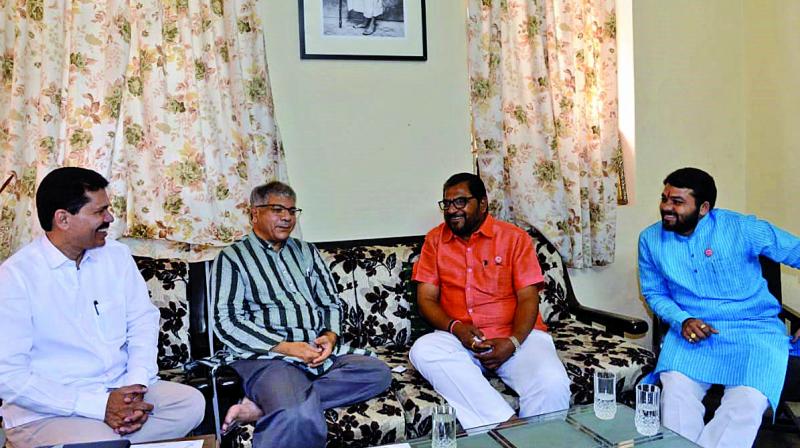 Mumbai: Swabhimani Shetkari Sanghatana leader Raju Shetti reached out to Bharip Bahujan Mahasangh (BBM) leader Prakash Ambedkar on Saturday in the city and tried to convince him to join the grand alliance against the Bharatiya Janata Party (BJP and not form a Third Front in the state. Mr Shetti met Mr Ambedkar along with Member of Legislative Council (MLC) Kapil Patil.

Mr Ambedkar said that he was ready for it and it was now upto the Congress to take a decision on his proposal and give him 12 seats out of 48 in Maharashtra.

The BBM leader has already formed an alliance with the Asaduddin Owaisiled All India Majlis-e-Ittehad-ul Muslimeen (AIMIM) for the coming polls. In fact, both leaders addressed a joint rally in Aurangabad, Marathwada on October 2, which grabbed many eyeballs. The BBM-AIMIM alliance is expected to divide the anti-BJP votes. Hence, Mr Shetti approached Mr Ambedkar and invited him to join the grand alliance.

Mr Shetti told Mr Ambedkar, “ The BJP government is anti-dalit, anti-muslim and anti-farmers. In such case, we will have to defeat it at any cost, and that too unitedly. So all like-minded parties joining hands would be a better option than having a third front.”

Mr Ambedkar agreed to the idea of a grand alliance. “We are open to it, but the Congress will have to take a flexible stand. They will have to see that muslims and dalits are getting right representation in power. We have already put our demands before Congress, which are negotiable,” said Mr Ambedkar.

Mr Ambedkar has said his party would not join hands with the NCP and also appealed to Rahul Gandhi to reconsider the Congress’s alliance with the NCP for future polls.