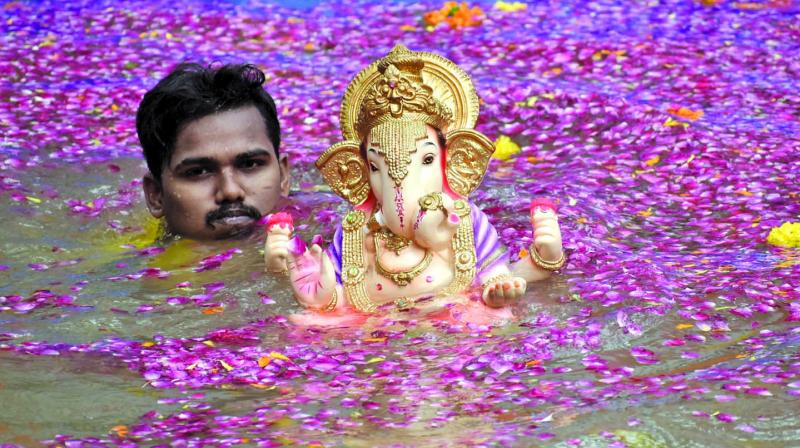 There are 69 natural spots (beaches, lakes, wells) and 32 artificial ponds for immersing the idols across the city.

Mumbai: The Brihanmumbai Municipal Corporation has made several arrangements for the convenience of devotees at various visarjan spots as Mumbaikars immersed thousands of five-day Ganapatis on Friday.

Moreover, it will be a busy weekend for the city, with six-day Ganpatis, including those of major Sarvajanik Mandals, set to be immersed on Saturday.

With popular immersion spots like Girgaon, Dadar and Juhu beaches attracting lakhs of devotees every year, the BMC has deployed over 7,824 personnel across the city. Moreover, the civic body will be monitoring the situation through 78 control rooms.

There are 69 natural spots (beaches, lakes, wells) and 32 artificial ponds for immersing the idols across the city.

The civic body has also made arrangements for 218 big nirmalya kalashas, 267 vehicles to transport the nirmalya (discarded offerings to God in the form of garland, flowers, fruits, coconut), 896 steel plates, 2717 floodlights and 42 inspection towers in extremely crowded areas.

The civic body has also deployed 65 motorboats and 45 floaters in case of emergencies to avoid any untoward incident.

It is to be noted that maximum number of Sarvajanik Ganpati idols are immersed in beaches and lakes. On the other hand, households Ganpatis are usually immersed in artificial ponds.

Meanwhile, the traffic police has decided to impose a complete ban on heavy vehicles, including three-wheeler goods carriers, across the city.

The traffic police has issued a notification stating that the ban will be in place from 2 pm on Saturday till 2 am on Sunday.

The ban will be re-imposed starting Thursday noon until 6 am on Friday (September 13).

However, all essential goods carriers and vehicles used to carry Ganpati idols have been excluded from these restrictions.