The submarine is the second of the six Scorpene class submarines, which are to be handed over to the Indian Navy. 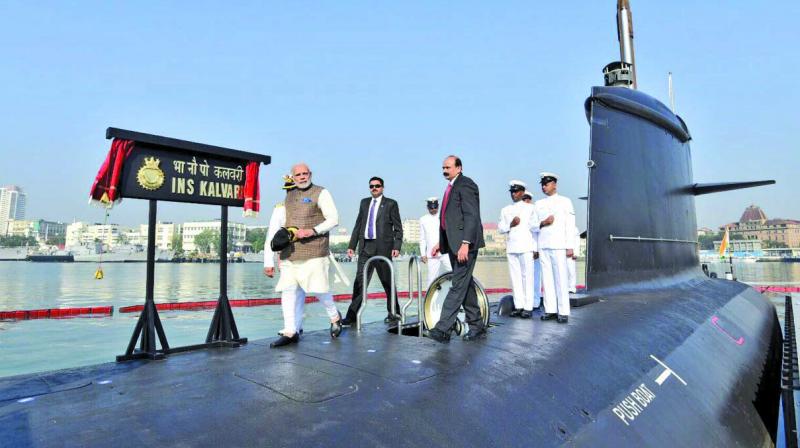 File picture of PM Modi during commissioning of INS Kalavari.

Mumbai: The second submarine ‘INS Kandheri’ by the shipbuilder Mazgaon Dock Limited (MDL) will be commissioned in next three months, revealed the officials from the dock. The submarine is the second of the six Scorpene class submarines, which are to be handed over to the Indian Navy.

INS Kandheri is the latest and unique model with features that will enable the functions of submarine with a click of a mouse. INS Kalvari, the first submarine, was handed over to the Navy in December 2017.

The MDL possesses large workshops, which have the capacity of building 11 submarines at a time. The mentioned submarine is built with integrated technology with French Combat system and Spanish tech for rest of the platform.

“The submarine is unique with features like a smart phone, any pump, valve can be moved or closed in a click. Such works initially required worker intervention,” said a spokesperson from MDL. He further added, “There is 60 km of cabling and 10 km of piping done in the submarine to manage everything through the control room.”  The work for the submarine was started in around 2008, it costs approximately `6,000 crore to build a submarine. These submarines are designed to fire torpedoes and anti-ship missiles.

INS Kandheri is upg-raded with the features that were introduced elsewhere in 2012, next the company officials stated that they plan to go wireless if more orders are received.

The Scorpene deal was signed in India in 2005 and reportedly the first submarine was supposed to be delivered in 2012.