107 villages along the banks of Krishna River in Sangli put on alert. 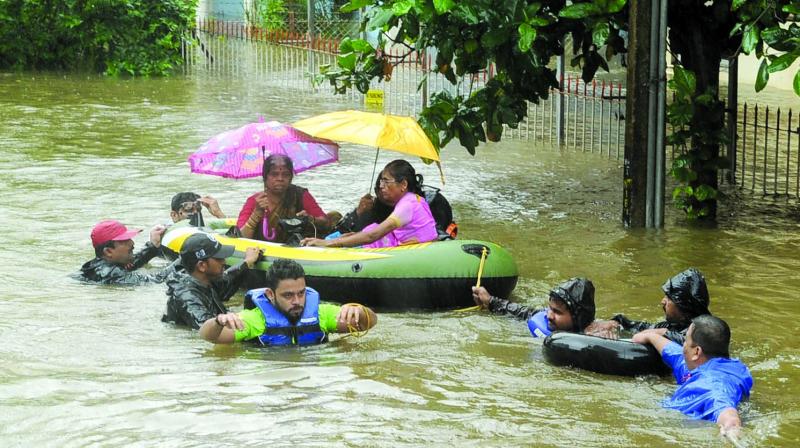 Locals evacuate their homes as the flood situation intensifies in Kolhapur. (Photo: AA)

Mumbai: Taking precautionary measures in light of the heavy flooding caused by incessant rains, around 50,000 people were evacuated and power supply to over 85,000 consumers was suspended in Kolhapur on Tuesday.

The Satara-Kagal national highway No. 4 was closed as Godavari River crossed its danger mark. The Panchganga too crossed the danger mark. Six villages in Shirol, a village in Hatkanangale and Chikhali, Ambewadi area and Kolhapur city have been affected by the intense downpour.

Two National Disaster Response Force (NDRF) teams coordinated the rescue operations on Tuesday and more teams were on their way to the site.

The Army, Navy and Coast Guard also joined the relief and rescue operations. Officials said that the deluge has also affected Sangli and Satara.

107 villages along the banks of the Krishna River in Sangli have been alerted about rising water levels.

“Owing to the bad weather in Kolhapur, the helicopter is unable to operate. Therefore, NDRF teams are being sent to Kolhapur via roads. A plan is also being chalked out to deploy an Air Force helicopter on Wednesday morning,” an official said.

Authorities have declared a holiday in the schools and colleges of Palus, Miraj, Valava, Kadegaon and Shirala Tehsils on August 7.

“Power supply to around 85,523 consumers was temporarily suspended as a precautionary measure,” an official from the Maharashtra State Electricity Distribution Company (MSEDCL) said.

District collector of Sangli, Abhijeet Chaudhary said that 43,635 individuals, comprising of 8,344 families have been evacuated in the district. Besides, 12,366 cattle have also been rescued.

Two rivers in Maharashtra — Krushna and Panchganga — converge at Nrusinhwadi area in Kolhapur. The water released from Koyana and Radhanagari Dam raised the water level in the area. The waterlogging has affected daily life in Kolhapur and Karad area.

According to the Indian Metrological Departm-ent, 60 mm rainfall was registered at the Kolhapur while Satara recorded 24.3 mm of rainfall by Tuesday evening.