A manhunt was initiated and on receiving a tip-off about the accused, unit four, too, started a parallel investigation into the case. 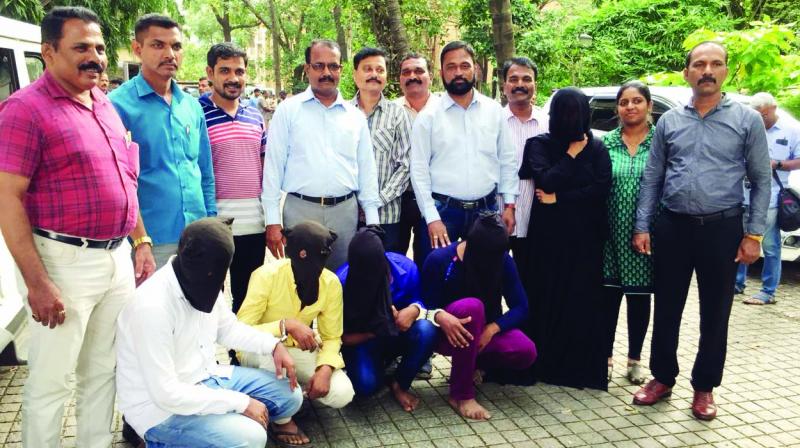 The five accused in black masks.

Mumbai: The Mumbai crime branch has cracked a kidnapping case involving a 13-year-old boy, arresting five of his abductors, including a woman who is the boy’s relative and the main conspirator in the crime.

The woman was in dire need of money and hatched the plot to make the boy’s father shell out extortion money. Upon interrogating the boy’s aunt, whom he had met last, the kidnapping plot came to light.

The captors demanded Rs 50 lakh from the boy’s father, who runs a leather manufacturing unit. The boy’s family had lodged a missing persons’ complaint with the V.B. Nagar police station. A manhunt was initiated and on receiving a tip-off about the accused, unit four, too, started a parallel investigation into the case.

The arrested accused have been identified as Sultan Khan (26), Jehangir Shaikh (28), Sohail Siddique alias William (33), Gufran Aarif Shaikh (26), and Shabina Khan (27), who is the victim’s distant aunt. Shabina Khan, who hatched the plot, arranged for the other accused and at around 9pm, all of them assembled near the boy’s residence in MHADA colony, Kurla (west).

Dilip Sawant, deputy commissioner of police (crime), said, “Shabina Khan called up the boy’s residence and got him to come down under the pretext of some work. Meanwhile, the gang emerged from their hideout and held him at knife-point, bundling him inside an auto-rickshaw before fleeing from the spot.”

The boy’s kidnappers threatened to harm his siblings if he raised alarm and held him hostage in Sohail Siddique’s residence in Shivaji Nagar.

They then shifted him to an empty shop located in the same neighbourhood owned by Sultan Khan. Meanwhile, they demanded Rs 50 lakh from the boy’s father as ransom.

The accused will now be handed over to V.B. Nagar police station.