Apart from Maratha reservation, the state government is also facing the heat on Dhanagar reservation. 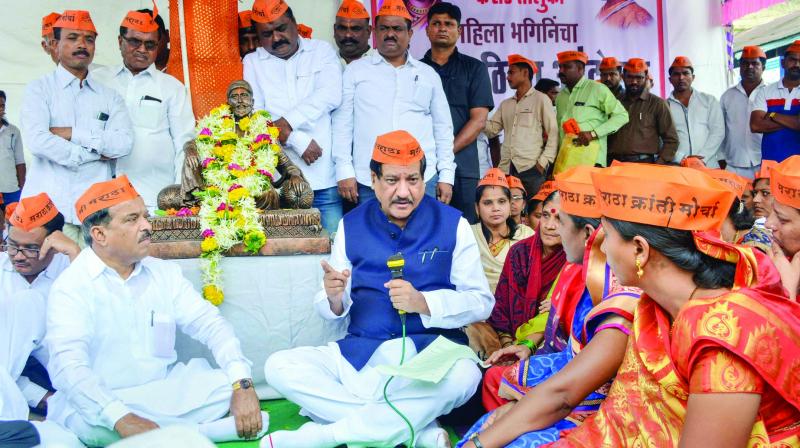 Mumbai: Maharashtra chief minister Devendra Fadnavis’s statement announcing a stay on the mega recruitment in the state government and assuring Maratha reservation by 2019 has brought criticism from opposition parties. The opposition leaders on Monday tried to corner Mr Fadnavis for the ‘delay’ in the statement that came after 12 deaths in the state during the Maratha protests.

The opposition also alleged that Mr Fadnavis tried to create a rift between Maratha and other communities with his statement on ‘reservation to Marathas keeping all other sections’ interest safe.’

In his statement, Maharashtra Congress chief Ashok Chavan said, “On what basis did Mr Fadnavis say that the reservation could be given before November? If this was so simple then why didn’t he inform about it to the protesters prior to the agitations? This could have saved 12 lives of the protesters.”

Mr Fadnavis on Sunday had said that Marathas will get reservation by November this year and also stressed that Maratha quota will not affect any of the existing reservations. Taking objection to it, Mr Chavan said, “The CM said that his government will try to give the reservation to Maratha by not harming others’ reservation. When and where did the Maratha community leaders ask for grant of reservation by cutting into other communities’ quotas? Mr Fadnavis is trying to bring Maratha and non-Maratha communities face to face for his political benefits,” slammed Mr Chavan.

Apart from Maratha reservation, the state government is also facing the heat on Dhanagar reservation. The Congress leader accused the BJP government of misguiding people of all communities by making false promises.

“The BJP government had promised Dhangar reservation in its first cabinet. It is yet to be given even after three and half years of rule. BJP had also promised farmers loan waiver,” he said.

Jayant Patil of Nationalist Congress Party (NCP) accused the government of showing a casual approach even after 12 people lost their lives for the community. He said, “This statement should have came earlier. But as usual Mr Fadnavis awaited for the political benefits.”