The turtle weighs 17 kilograms and the gender of the turtle is yet to be determined. 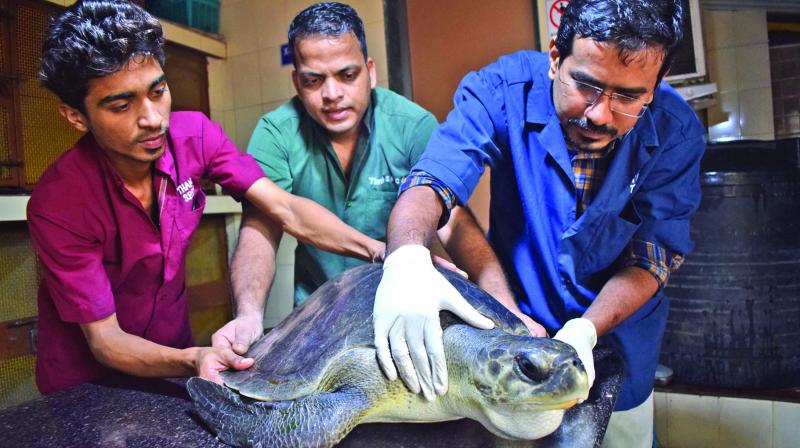 Mumbai: An injured Olive Ridley turtle was rescued from Versova Creek on Monday. The turtle's flippers were cut off when it was found. It was taken to the Thane Society for Protection of Cruelty to Animals (TSPCA) where it is stable as of now. Veterinarians from the Thane SPCA stated that it is the first bigger turtle that have been rescued by the organisation this monsoon other than the smaller turtles.

"One flipper of the right side and the other from the left side of the turtle was cut off and the turtle seemed severely exhausted. We took it from the Versova Creek in the morning and treated it the SPCA. For now, its condition is stable and it is feeding properly too, but we cannot release it into the wild," said Sadashiv Thoke, veterinarian at the TSPCA.

The turtle weighs 17 kilograms and the gender of the turtle is yet to be determined. "We cannot ascertain how the turtle lost its flippers. They must have been the victims of fishermen frustrated by the depleting fish catch, who cut off flippers of turtles stuck in their nets or of the sheer bad luck of being caught in a ghost net discarded at sea and injuring a flipper struggling to break free,” Mr. Thoke added.  The turtle is slated to be transferred to the Turtle rehabilitation centre in Dahanu on Monday night. With the season of Monsoon, several injured sea turtles, mostly Olive Ridley.