Since Sunday as many as 30 blue bottles were seen at Juhu Beach. Twenty people have been stung at Juhu beach so far. 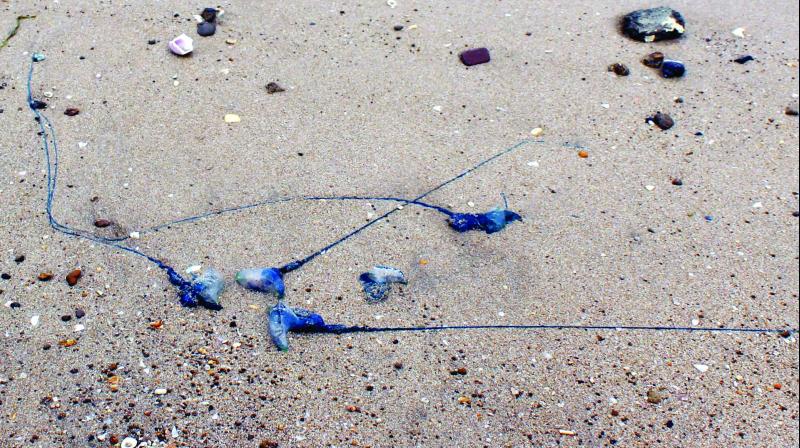 Mumbai: After the arrival of blue bottles, also known as Portuguese Man O’ War, at Girgaum Chowpatty beach last week, the marine animals, known for their toxic and painful sting, have landed on several other coasts like Aksa Beach and Versova in the last two days.  Since Sunday as many as 30 blue bottles were seen at Juhu Beach.  Twenty people have been stung at Juhu beach so far.

Sunil Kanojia, who is the the president of the Sea Guardian Life Guard, stated that if anybody gets stung by blue bottles, they should immediately approach guards at the beaches who can treat them.

“Since the last two- three days, we have been getting reports of around 50 persons getting stung by blue bottles across Mumbai beaches. The guards have been asking citizens visiting the beaches to stay away from the the water.” He said, “People usually want to touch the blue bottles, because of their beautiful appearance, but one should beware as their sting is very painful,” said Kanojia.

At Aksa Beach, blue bottles stung around 40 people on Saturday.

“Their tentacles stick to the skin due to which people feel extreme pain and their body starts itching. Cold ice or lime should be applied on the wound immediately and the person should be rushed to the nearest hospital for treatment. The sting can also be more dangerous if it is on the face or abdomen area,” he added.

The marine organisms wash ashore on the city’s coasts during the monsoon due to strong wind currents.

According to marine experts, the blue bottles feed on small fish by paralysing their prey through their tentacles. “These marine animals are important in the ecosystem and contribute to the food chain for larger marine animals, as many sea turtles feed on them. People should beware of blue bottles even if they appear dry. The civic body should put up boards at all Mumbai beaches,” said Pradip Patade, founder of ‘Mar-
ine Life of Mumbai’.

The Brihanmumbai Municipal Corporation (BMC) had on Saturday put up a display board at Girgaum Chowpatty after reports of people getting stung started surfacing.